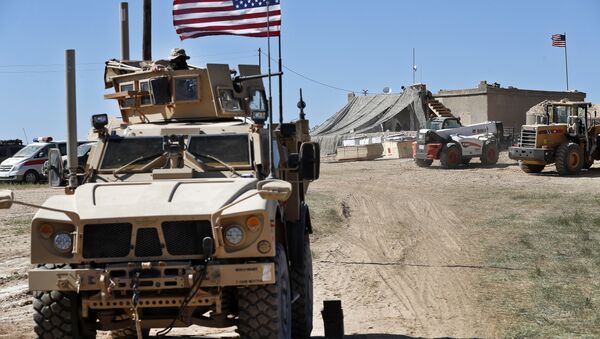 For a second time in a week, President Trump has said it's time for the US to withdraw from Syria; however, US UN envoy Nikki Haley and members of the president's own national security team are trying to talk him out of it.

Speaking at Duke University Thursday night, Haley said that the US does not have plans to withdraw its estimated 2,000 troops from Syria anytime in the near future, and would make a decision on the issue only after the Daesh (ISIS) terrorists were completely destroyed.

"I think we've probably eliminated 80% of [Daesh*] – destroyed the caliphate, and are continuing to move in a good direction," Haley said. "What the president is saying is that that was always our priority – to defeat ISIS…When we defeat ISIS, he's not saying he's going to get out, he's saying we're going to work with our partners and our friends and decide 'what next'," the ambassador added.

Damascus Hasn't Received Official Info on US Troops' Withdrawal - Syrian Envoy
The president, according to Haley, "listens to his general completely" on the Syrian issue, "because they don't want ISIS to come back."

The ambassador's words seemed to directly challenge President Trump, who said earlier this week that it was time for US troops to come home from Syria. "I want to get out. I want to bring our troops back home," Trump said Tuesday at a press conference in Washington.

"I want to start rebuilding our nation," Trump added, pointing out that the US has spent $7 trillion on wars in the Middle East over the past decade and a half, and has gotten nothing out of it. "Seven trillion. We have nothing except death and destruction – it's a horrible thing. We were very successful against ISIS, we'll be successful against anyone militarily, but sometimes it's time to come home and we'll be thinking about that very seriously," Trump stressed.

Trump's latest remarks came less than a week after comments he made last Thursday that the US would be "coming out of Syria very soon" and letting "other people take care of it."

Read More: Future of US Troops in Syria Unclear as 'Divided Counsels' Argue in Washington

However, along with Haley, other members of the Trump administration have also challenged the president's views. US envoy for the coalition against IS Brett McGurk stressed that America's mission fighting Daesh "isn't over," and that the US was going to "complete that mission."

US Army General Joseph Votel, head of Central Command in charge of US troops in the Middle East, added that it's vital for the US to play a role in "stabilizing" Syria after Daesh is defeated.

Analyst Reveals Consequences of US Contradictory Messages in Syria
Trump's remarks also prompted some US media to run articles criticizing the president. The editorial board of the New York Times released a piece titled "Trump's Approach to Syria is No Way to Run a War," slamming the president for his "impulsive," "emotion-based" policy, and warning that a hasty withdrawal could lead to a "resurgence by ISIS," just as it had in Iraq following President Obama's withdrawal from that country in 2011.

The New Yorker, for its part, slammed the president with an article called "Trump Defies His Generals on ISIS and Syria," slamming him as a "foreign policy neophyte." CNN had a similar approach, accusing the president of "getting testy" with his own national security team.

Economist Jeffrey Sachs was one of the few major public voices to offer support for the president. "It's long past time for the United States to end its destructive military engagement in Syria and across the Middle East, though the security state seems unlikely to let this happen," Sachs wrote, in an op-ed published by the Boston Globe. 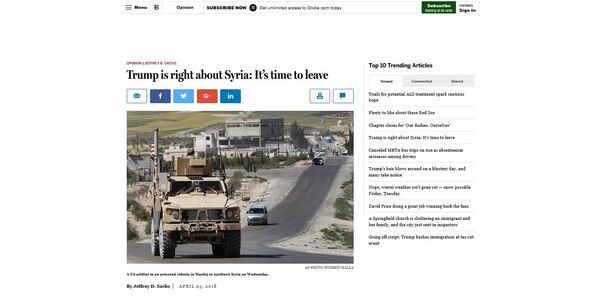 According to the economist, the US approach of "overthrow[ing] the governments we don't like and replac[ing] them with ones we do like" is "naïve," and has served only to enmesh the country "in nonstop wars of regime change" throughout the Middle East and North Africa.

These wars, Sachs stressed, not only violate international law and cost trillions of dollars, but also undermine US democracy, because the wars "are conducted with secrecy and non-stop lies, and almost always fail in their aims." Ultimately, Sachs urged the US to end its military operation in Syria, and to "let diplomacy under a UN framework sort out the aftermath."

Trump's increasingly adamant position on a Syrian withdrawal is not new. On the campaign trail in 2015 and 2016, he promised to get the US out of foreign entanglements, and attacked both Presidents Barack Obama and George W. Bush for spending trillions of dollars and thousands of lives on Middle Eastern wars.

* A terrorist group banned in Russia.