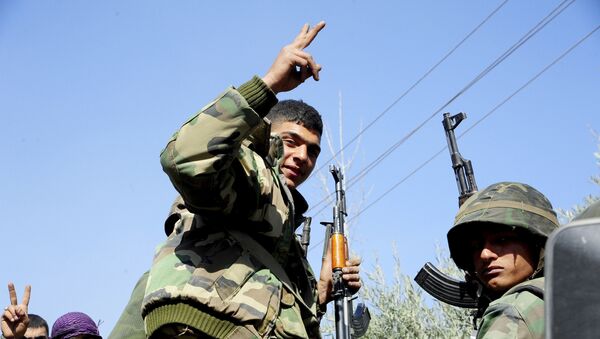 © AP Photo / SANA
Subscribe
Commenting on the Syrian government forces' liberation of the suburban Damascus region of Eastern Ghouta in an interview with Sputnik, Syrian journalist Yazen Kallash suggested that the army will now advance on a strategically important mountainous area near the Lebanese border which has yet to be cleared of terrorists.

"First and foremost, the region of Eastern Qalamun has long been in the hands of terrorists, so [its liberation] will be an important psychological victory," Yazen Kallash said.

He also underscored the "very important strategic location" of the area where terrorists established communication routes between the mountain range and the Syrian desert.

READ MORE: How Liberation of Eastern Ghouta Will Improve Lives of Damascenes

"[Syria's] border with Iraq and Jordan is located nearby. That's how they [terrorists] planned to split Syria into southern and northern parts.Therefore, when this mountainous part of Syria is liberated, it will be a great victory for the army," Kallash pointed out.

Wrapping Up the Eastern Ghouta Operation

"The Syrian Army will fight the remaining forces of armed groups in this area. Then the government troops will focus on maintaining the security of the areas adjacent to Syria's borders with Iraq and Jordan," Amhaz concluded.

Another Focus on Idlib

Russian journalist Andrey Kots, for his part, wrote in his article for Sputnik that the Syrian Army should also focus on Idlib, which he described as "one of the most problematic provinces in Syria."

He recalled that about 20,000 al-Nusra terrorists are located in the province, in addition to militants from other armed groups.

"Obviously, Idlib will soon become a new battlefield [for the Syrian Army]," Kots pointed out, referring to increasing activity of a Russian Aerospace Forces group in the area.

It Was Kurds' Big Mistake to Stop Syrian Army From Entering Afrin – Politician
He also recalled that Bashar Jaafari, Syria's permanent representative at the United Nations, signaled on March 27 that Damascus had discovered that a number of foreign specialists are working on staging a new chemical attack in Idlib, something that Kots said also indicates that the Syrian Army may launch an offensive on the Syrian province.

Last Saturday, the command of the Syrian Army stated that they had liberated all the settlements in Eastern Ghouta, which had been controlled by terrorists since 2014.

Maj. Gen. Yuri Yevtushenko, head of the Russian reconciliation Center for Syria, said in turn that a total of 153,140 people have been evacuated from the area of Eastern Ghouta with the assistance of the center since the introduction of humanitarian pauses in the area on February 28.

The views and opinions expressed by Yazen Kallash, Hakam Amhaz and Andrey Kots are those of the journalists  and do not necessarily reflect those of Sputnik.