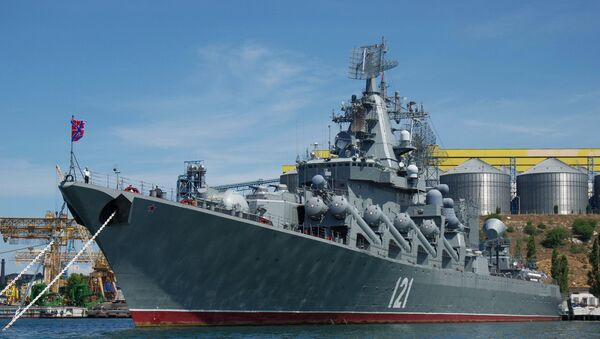 SEVASTOPOL (Sputnik) - The command of Russia's Black Sea Fleet is considering the issue of ensuring the safety of navigation in the north-eastern part of the Black Sea, in particular, the permanent presence of naval forces and equipment in this area, in addition to maritime border guards, a Crimean security source told Sputnik on Tuesday.

On March 26, Ukrainian border guards detained the Russian ship Nord, claiming that its crew had violated the sea border. The Russian Foreign Ministry demands the Ukrainian side to return the captured ship, which is in the Ukrainian port of Berdyansk, and to release the crew.

"The threat of Ukrainian state piracy has already emerged: if the appropriate order is received, the Black Sea Fleet, including its aviation, will begin to ensure the safety of Russian shipping, that is, will be present in the north-eastern part of the Black Sea and in the zone of the Azov basin," the source said.

One Goes Out, Another Comes In: US Destroyer Leaves Black Sea, New Ship Sails In
Aggressive actions of Ukrainian maritime border guards in international waters represent not only the risk of seizure of Russian vessels, but also the formation of state-level piracy, the source stressed.

Meanwhile, the first deputy chair of the Russian upper house's defense committee said earlier that US statements that Russia is allegedly increasing its military presence in the Black Sea are "direct lies", adding that the "number of accusations against Russia" from US are seeking to divert attention from the military build-up of the United States in the region.

The statement came after the US media reported that according to a US military official, the US Navy was increasing its presence in the Black Sea in a bid to resist the Russian armed forces build-up in the area.