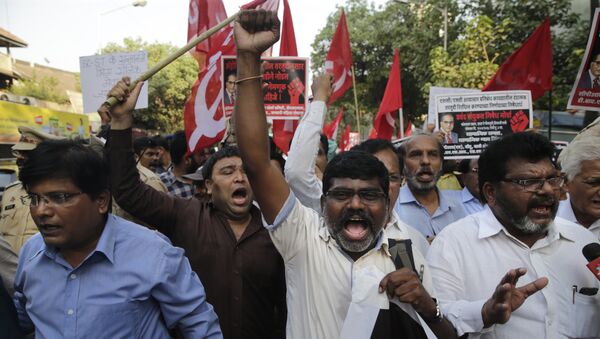 On March 20, India's apex court passed a ruling diluting the provisions of the law that seeks to protect people of the lower castes against atrocities committed by the upper castes. The ruling banned automatic arrests and registration of criminal cases under the said law, triggering a nationwide agitation by the lower castes.

New Delhi (Sputnik): Thousands of people belonging to India's lower castes took to the streets across the country on Monday against the apex court's order that seeks to dilute provisions of the Scheduled Castes and the Scheduled Tribes (Prevention of Atrocities) Act, which protects marginalized communities against discrimination and atrocities.

Sporadic clashes were reported between the protestors and the police. According to official figures, at least seven persons were killed and hundreds of others were injured during the clashes, mainly in central and northern parts of the country. Four persons were killed in the central state of Madhya Pradesh and one in each of the states Bihar, Rajasthan and Uttar Pradesh. The central government deployed eight companies (each company comprising 90-100 men) of the anti-riot rapid action force (RAF) to Uttar Pradesh and Madhya Pradesh to bring the situation under control. In Bhind of Madhya Pradesh, the Indian Army had to intervene to contain the situation from turning into a riot.

"We have sought more force from the Centre. We are keeping an eye on the situation," Director-General of Police, Uttar Pradesh, OP Singh, told the local press.

Educational institutions were closed and commercial activities were severely affected across the country. Communication and transportation, including train services, were disrupted across northern and eastern India, mainly in Madhya Pradesh, Rajasthan, Haryana, Uttar Pradesh, Punjab, Bihar and Jharkhand.

On March 20, the Supreme Court of India passed a judgment which bars the immediate arrest of individuals accused of atrocities against lower caste people under the SC/ST (Prevention of Atrocities) Act, 1989. The judgment held that the prior sanction of an appointing authority is required for prosecuting officers who deal with complaints under the Act in their official capacity.

"There is no absolute bar against grant of anticipatory bail in cases under the Atrocities Act if no prima facie case is made out or where on judicial scrutiny the complaint is found to be prima facie mala fide." It further reads.

People are clueless about atrocities act!None of the protesters know what this is all about!opposition and Mevani is busy in politicising the entire issue!Govt has already filed a petition without wasting any time but no one is telling them to end this stupidity! #BharatBandh pic.twitter.com/L7FpxQQj8u

The lower castes, collectively known as Dalits, fear the order would further weaken the law which is already poorly enforced, with abysmally low conviction rates. They also fear that such steps may eventually affect the reservations for lower castes in jobs across sectors.

The lower castes comprise over a quarter of India's total population and they often face discrimination by those identified as the upper castes in the ancient caste hierarchy system. Last Thursday, a group of people belongs to the upper caste had allegedly beaten to death to a lower caste youth for owning and riding a horse in the western state of Gujarat.

Meanwhile, the Narendra Modi government filed a petition before the Supreme Court on Monday seeking review of the controversial judgment that has sparked the protests.

The central govt was not a party in the case on SC/ST Protection Act & it does not agree with the reasoning given by SC in the judgement. The govt has therefore filed a comprehensive review petition. Modi govt & BJP is fully committed to the welfare of SC/STs: Shri @rsprasad pic.twitter.com/TfLQeBwsUu