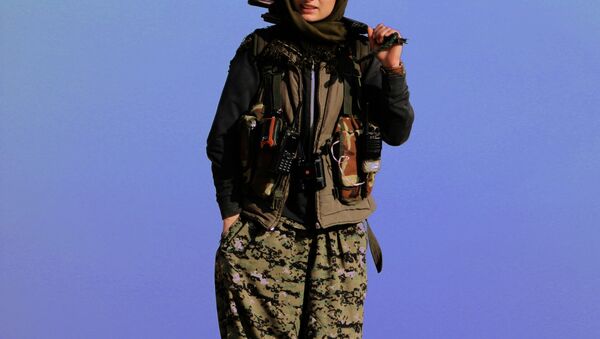 CC BY 2.0 / Kurdishstruggle / Kurdish YPG Fighter
Subscribe
This month marks five years since the famous Kurdish female self-defense squads arose. The women of Syrian Kurdistan have liberated themselves over the past years to an extent one could previously only dream about in the region.

It was the death of 26 year-old British female fighter Anna Campbell in a Turkish bombardment in Afrin that quickly reminded the public of the female self-defense squads.

Being a female anarchist, feminist and animal rights protector, she had no connection with the Kurds before travelling to Syria. Nevertheless, according to Anna’s father, she took the Kurdish issue close to heart and admired the social buildup in Rojava (Northern Syrian Democratic Federation, or Syrian Kurdistan — an autonomous federation that emerged in 2012) Sputnik’s speakers from the female battalions stated that there are dozens of girls from Europe, the US and Australia among them.

"Kurdish female self-defense militias are a phenomenon in itself. It’s not surprising that they are attracting activists from all around the world. Firstly, the female battalions have demonstrated perfect results in their struggle with terrorists, who are universally considered to be ’evil forces,’ opposing any progress. Secondly, their members are eager to fight for women’s liberty in all possible ways, including armed confrontation,"- Melissa Delal Yanmis (nicknamed Delal Kurdi), a member of the Kurdish community in Austria told Sputnik. Just to note, she returned from Rojava last year. 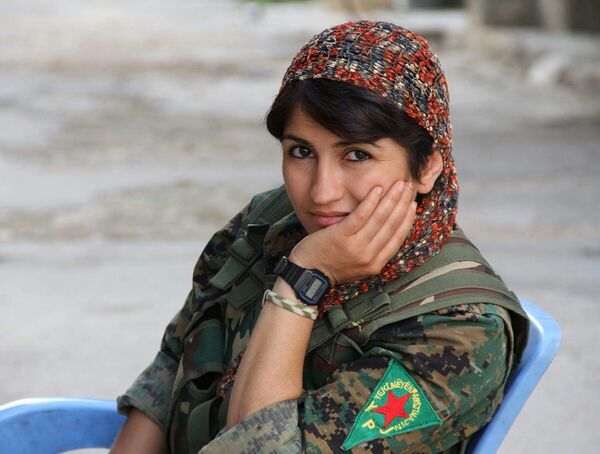 "Kurdish ideologist and founder of Kurdistan Workers’ Party, Abdullah Öcalan teaches us in his books that a free life is impossible without a radical female revolution, which will change the way people think and their social life in general. Anna Campbell was a real rebel and a real internationalist. And she became yet another light in this revolutionary fire, along with other foreign female combatants who have joined our squads. I hope, Russian women internationalists will also join in our struggle."

"I am a feminist, like most Kurdish women. A Kurdish woman is not afraid to die – death is afraid of her. We do not recognize defeat. Victory and progress – this is our motto. That’s why women from all around the world share our beliefs," – declared the 23-year-old student Jihan (battlefield nickname – "Afrin’s Daughter") speaking to Sputnik. She is currently fighting with a Kurdish battalion in Afrin.

The Kurdistan Workers’ Party was founded in 1978 as a Marxist-Leninist party, but with a nationalist twist. The Middle East has also abounded in socialist movements, but it is the PKK that has become the most feminist.

For Kurds, ethnic self-identification is more important than the religious one, that’s the reason why the ideas of gender equality have been adopted by them to a greater extent than by the broader Muslim society. 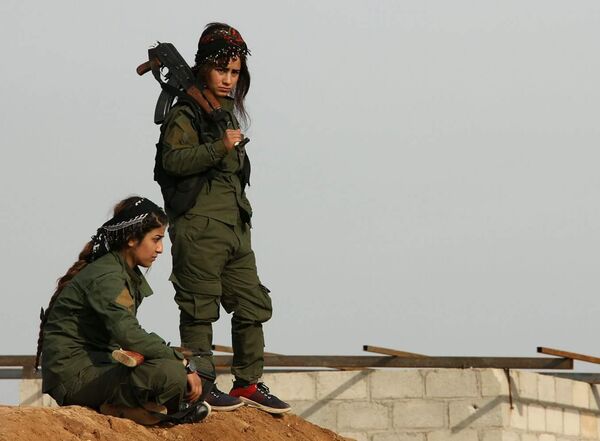 Thanks to the role that female self-defense units have played in the overall struggle for national identity and battles against Islamists, Kurdish women now enjoy liberty and rights, comparable to those of Israeli women.

Until recently Kurdish women were forced into early marriages, genital mutilation, honor killing and polygamy. Nevertheless, six years ago, the authorities of the newly proclaimed Democratic Federation of Northern Syria introduced legislation to put an end to all this (although, in some provincial areas the practices continue to exist).

Today, according to the provisional Constitution of Syrian Kurdistan, women are expected to hold a minimum of 40 percent of all government posts. Separately, all social institutions are obliged to be chaired both by a man and by a woman, along with the executive councils of the three Syrian Kurdistan regions.

Up to 40 percent of the Kurdish fighters battling in the Middle East are women. March 2013 saw the first female self-defense battalion form in Afrin, a year later such formations appeared in other parts of Syrian Kurdistan. For now, the female squads in Syria are roughly 25,000 strong in number, whereas in the Iraqi Peshmerga (literally “staring death in the face”) battalions there are just 2,000 female combatants.

"Male and female armies have their own commanders, a man and woman respectively.  Men may not issue orders to women. Even top ranking officers in male battalions first have to address female commanders, who are expected to instruct their subordinates. Still, top female ranks may issue orders to male combatants," British Kurd  Ozkan Ozdil, who worked as a battlefield doctor in Syria last year and even took part in the liberation of Raqqa, told Sputnik.

"We closely communicated with the female formations – we played sport together, partook in joint military drills, cooked food, did the cleaning-up. We only slept in different barracks. We lived like one big family. Ranks meant nothing in our communication, unless it had to do with military orders. Women, as I see them, are very daring. And perhaps, in some respects, even bolder than men.  I am absolutely charmed by them. They dance and sing. And they can be heard from far away. Even Daesh militants were scared of them."

According to him, there is a harsh stance on battlefield romances: “Marriage is generally viewed upon as a patriarchal instrument. People certainly fall in love and find some time for dating and having sex. But overall, love affairs are strictly forbidden. If anyone gets to know this, the couple will be kicked out from the squad. And this is a huge disgrace.”

Syrian Kurdistan has seen a dramatic rise in divorce, the prevailing reason for them being polygamy for men, domestic violence or early marriages. Girls who haven’t yet given birth to children frequently join female squads following a divorce.

In the course of the Olive Branch operation, which Ankara has been conducting in Northern Syria since January, on March 18, Turkish forces assisted by Syrian opposition divisions seized the city of Afrin, which had been controlled by Kurds.

Sputnik’s speakers insist that Kurds will certainly attempt to win back Afrin from Turkey. Nevertheless, in the months to come, Kurds will be preoccupied with other issues.

On Wednesday, the Turkish National Security Council said that Ankara would take military action if Kurdish units do not withdraw from Syrian Manbij.

After that, the Turkish army may head east of the Euphrates into the heart of the Kurdish territories to grab control over districts that are not dominated by Kurds, namely the Tell Abyad district and Ras al-Ayn.

"What Turkey has done to Afrin and is persisting to do in Northern Syria is real ethnic cleansing," – said Melissa Delal Yanmis.

"The female self-defense squads resisted the invaders. But it is now obvious that there was no other way out but to leave Afrin. The Kurdish women opted for a guerilla war, including attacks by female bombers on Turkish convoys."

Sputnik’s interviewees are certain that sooner or later, Syrian Kurds will defeat Turkey and win back Afrin, preserving autonomy in Northern Syria.

"We do not need an independent state – it has proven to be inefficient. According to Abdullah Öcalan’s doctrine, one needs a system of democratic federalism.  All the communities living here – Kurds, Arabs, representatives of different religions and ethnic groups – everyone must take part in determining the fate of the region and managing Rojava’s cantons on equal terms, including gender equality," Ozdil said.