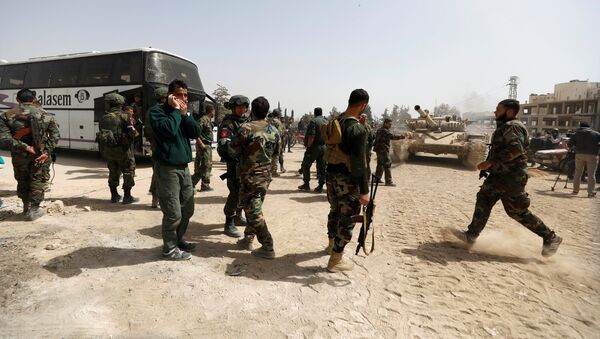 The Syrian military found the Israeli-made weapons in the town of Harasta, about 10 kilometers from central Damascus, according to a Press TV report citing Syrian state television. The town was occupied by Ahrar al-Sham, a collection of hardline Islamist militias. The Syrian military freed the town on Saturday.

The find is the second of its kind in recent weeks. Late last month, the Syrian Arab News Agency published video of a large cache of what it said were Israeli-made weapons and ammunition left behind by Daesh (ISIS)* in eastern Syria.

In addition to the Israeli military hardware, the Syrian army has found mass graves of civilians and army personnel believed to have been killed by the territories, underground facilities, and makeshift weapons manufacturing plants.

The Syrian military launched Operation Damascus Steel last month in a bid to end the regular Islamist rocket attacks on the Syrian capital. A month and ten days into the operation, Damascus controls between 85-90% of the militant-held East Ghouta pocket.