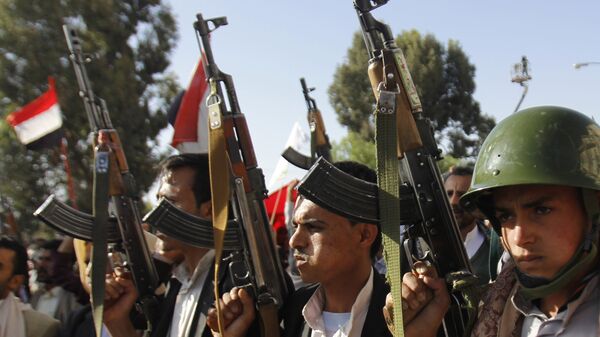 © Sputnik / Osama al-Sabah
/
Go to the mediabank
Subscribe
International
India
Africa
The Supreme Political Council of Ansar Allah, the movement of the Houthi rebels, has called for the reconciliation of all Yemenis, including those who are fighting today on the side of the coalition led by Saudi Arabia, according to the Houthi statement.

"Choosing peace may not be in the plans of the enemy coalition, but we must not give up after all the sacrifices. We need to strive for inner reconciliation and offer our hands to Yemenis who fight with them to protect the oppressed people and alleviate their suffering," the Houthis' Ansarullah political council chief, Saleh al-Samad said in a statement.

The Houthi chief said that Yemen's enemies in Riyadh are profiting from the war and spend millions daily to maintain hostilities.

Regional UNICEF director Geert Cappelaere in the UN children's agency has announced that the number of severely malnourished children in Yemen has doubled in three years of civil war, from 200,000 in 2015 and that an additional half a million boys and girls are unable go to school.

Cappelaere says both sides have blocked or held back humanitarian aid shipments, including solar equipment and fuel needed to improve access to clean water and fight an outbreak of cholera and diarrhea that affected more than one million Yemenis last year.

Today in #Yemen, compared to three years ago, half a million more children are not able any longer to go to school.

Nearly 2 million Yemeni boys and girls are not attending school or never had a chance to. #EducationUnderFire#ChildrenUnderAttack pic.twitter.com/pcCAA9UVHJ

Yemen's Houthi armed group has set forth a proposal for consideration of the United Nation's Security Council to end the civil conflict with the Yemeni government, Muhammad Ali Al-Houthi, the head of the higher revolutionary committee, said earlier.

A Saudi-led Arab coalition began a military operation in Yemen three years ago upon the request of the Hadi government, struggling against rebels who had seized the capital Sanaa.

The violent conflict that has embroiled Yemen since 2014 intensified in in November 2017, when former allied Houthis and units loyal to former Yemeni President Ali Abdullah Saleh began fighting, which resulted in the death of Saleh on December 4. The conflict was spurred by Saleh's willingness to start negotiations with the Saudi-led coalition in order to lift the country's blockade.