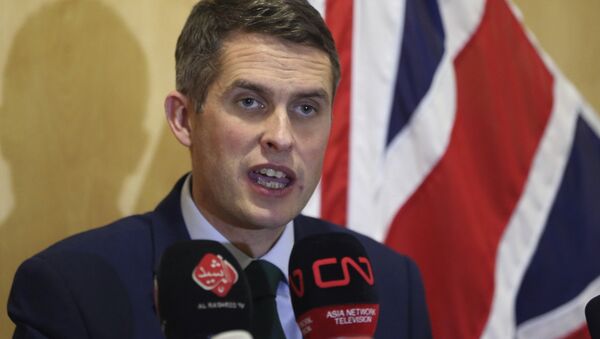 MOSCOW (Sputnik) - London has abandoned its "immense" political traditions and the culture of dispute in favor of a "predictably hostile" policy, presidential spokesman Dmitry Peskov said in an interview with RT news channel.

UK Defense Secretary Gavin Williamson has accused Russia of being behind this month’s nerve agent attack in Salisbury. Asked how Moscow should respond to the UK’s expulsion of 23 Russian diplomats, he told it to "go away and shut up."

Commenting on the UK’s culture of dispute, Peskov told RT it was getting "lower and lower." "What we see is the country of Byron and Shakespeare, the country of Conan-Doyle, the country that used to be a brilliant empire with immense political traditions of diplomacy and so on and so forth, it turned into a country where politicians are making, let me humbly say, irresponsible statements," he said.

Russia's UK Envoy to EU on Skripal Case Reaction: 'Trust But Verify'
"This is a problem. It’s a reflection of a very hostile policy, predictably hostile policy," Peskov added.

A number of countries are so concerned about a rising Russia they are ready to put international laws at risk to contain it, Peskov said.

The spokesperson noted that Russia was not going to engage in an arms race which is against President Vladimir Putin’s priorities.

"Russia is not going to be driven into an arms race. It doesn’t correspond with President Putin’s primarily goal of domestic economic development and domestic breakthrough in economy," he said.

'The Nuclear Arms Race Has Never Really Ended' – Analyst
"So we all, and President Putin, do not need an arms race. It was confirmed and declared by President Putin and this is the main declaration that we have to take into account," he added.

Peskov stressed that the president’s plan to deal with internal issues would not further isolate Russia from the rest of the world.