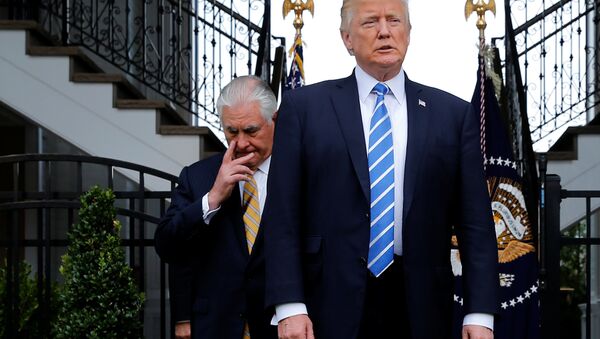 Tilleron’s ouster, announced by Trump in a Twitter post on Tuesday, ends a relationship that was from the beginning marked by conflicting positions on a number of foreign policy issues including Iran and North Korea, among others.

"Pompeo, Director of the CIA, will become our new Secretary of State. He will do a fantastic job!" Trump said in a twitter post. "Thank you to Rex Tillerson for his service!"

Trump, later in the day, revealed to reporters the main thrust behind the decision to terminate Tillerson, who lasted just over 400 days in his position as Secretary of State.

Not Tough Enough? Rex Tillerson’s Sparse Legacy as Secretary of State
A White House official said Trump wanted to make a change at the State Department ahead of the expected talks with North Korean leader Kim Jong Un and trade negotiations.

The ouster was made even more controversial when the White House fired Under Secretary of State for Public Diplomacy Steve Goldstein for suggesting that Tillerson did not find out about his fate until Trump’s tweet on Tuesday.

The manner in which Trump terminated Tillerson drew the ire of lawmakers including Senator Patrick Leahy, who blasted the president for running the US government and foreign policy like "an erratic ratings-driven TV impresario" which was inimical to American interests.

"Firing a Secretary of State by Twitter may make for great drama and instant TV ratings, but this, and countless other instances like this, produce undiluted instability that damages the nation and the office of the presidency at just about every level," Leahy said in a statement.

In a press release on Tuesday, US Senator Dianne Feinstein said that Trump has exhibited "a pattern and practice to dismiss anyone with whom this president has a policy difference, and that appears to be the case with Secretary Tillerson."

Tillerson delivered a sobering final address at the State Department just hours after his dismissal.

During the press conference, the former Exxon Mobil chief told reporters that he would be handing the department over to the care of Deputy Secretary John Sullivan by end of day Tuesday, and that his last official day on the job will be March 31.

Tillerson said much more needed to be done to achieve peace in Syria, stabilize Iraq and continue the global campaign to defeat the Islamic State terrorist group (banned in Russia).

During the farewell speech, Tillerson warned that Russia’s actions have put the country on a path to isolation.

"Russia must assess carefully as to how its actions are in the best interest of the Russian people and of the world more broadly," Tillerson said. "Continuing on their current trajectory is likely to lead to greater isolation on their part, a situation that is not in anyone’s interest."

Russia
Former ‘Russian Puppet’ Tillerson Rendered Resistance Hero After Firing
The United States also has much work ahead to establish a clear view of the nature of its future relation with China, Tillerson said. He also said that the US global campaign of putting maximum pressure on North Korea "exceeded expectations."

Tillerson’s strong words about Russia in his exit speech did not impress critics such as Senator Chuck Schumer, who said via Twitter he hopes Pompeo would take a tougher line with Moscow.

Some lawmakers welcomed the news that Pompeo was picked to be the next Secretary of State, especially given hopes he would be tougher on Russia, while others questioned whether he possessed the diplomatic acumen to succeed.

Trump in the same farewell tweet storm to Tillerson, announced that deputy director Gina Haspel would replace Pompeo. Haspel would be the first woman to ever run the spy agency yet her selection raised concerns given her connections with the CIA torture program.

Haspel oversaw the interrogation of a detainee who was waterboarded 83 times in a single month before the agency concluded the suspect had no useful information. Subsequently, the European Center for Constitutional and Human Rights urged German authorities on July 7, 2017 to issue an arrest warrant for Haspel for her role in the torture program.

US Secretary of State Rex Tillerson Speaks After Being Fired by Trump
Human Rights Watch (HRW) in a press release urged the US Senate to reject both candidates given "the potential for Pompeo and Haspel to endorse abusive practices and lend support for their use abroad."

Feinstein said Pompeo’s role as CIA Director had little to do with diplomacy and his new role as top diplomat will require patience and diligence.

US House Speaker Paul Ryan said in a statement that Pompeo possesses the proper experience to serve as the next top US diplomat.

The Russian government is ready to begin working with Pompeo but is under no illusion that relations with Washington will improve, Yevgeny Serebrennikov, first deputy chair of the Russian upper house’s defense and security committee, said.

"Russia will cooperate with all those appointed to this or another post in the Trump administration. We are pursuing the course on reducing tensions in relations between our countries, but our partners apparently do not share this aspiration," Serebrennikov said.

Former Syrian Diplomat Bassam Barabandi told Sputnik on Tuesday that Tillerson’s departure is unlikely to change US policy on Syria.