Putin: Blame Game Between US, Russia 'Road to Nowhere' 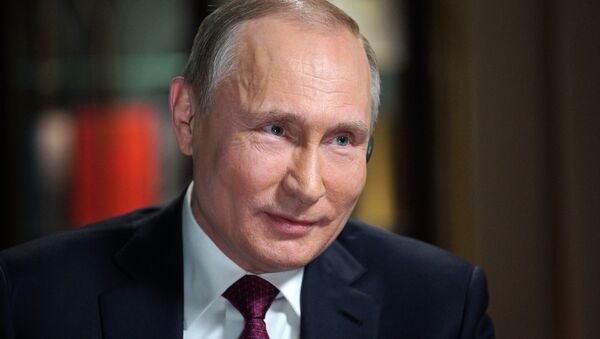 WASHINGTON (Sputnik) - Russian President Vladimir Putin has said the continued mutual accusations between Moscow and Washington would lead nowhere and acknowledged that US President Donald Trump realized that too.

"Despite the fact that he is a first-time president, he is a quick study and he understands very well that this level, where we are, engaging in mutual accusations, this is a road to nowhere," he said.

Master Stroke: US Scholar Explains Why 'Putin Has Trump in His Back Pocket'
The Russian President denied being treated with reverence by his US counterpart, whom he described as an experienced and pragmatic businessman.

"I don’t think he treats me personally with reverence. I believe that he is an experienced person," Putin said.

"He’s a businessman with vast experience," he added. "And he understands that if it is necessary to establish a cooperative relationship with someone then you have to treat your current or potential partner with respect. Otherwise nothing will come of it. I think this is a purely pragmatic approach."

The two heads of state met last year on the margins of the G20 Summit in Hamburg, Germany. In a documentary released earlier this week, Putin said he was not disappointed with Donald Trump because one could negotiate with him.

Asked if he ever reads Trump’s tweets, Putin replied, "No," and added he never tweets because he has "other ways of expressing my point of view or implementing a decision. Donald is a more modern individual."

World
Gorbachev Urges Putin, Trump to Resolve Dispute Over INF Treaty
During the interview, the Russian head of state denied giving orders or in any way encouraging anyone to interfere in the 2016 US presidential elections.

Pressured on whether he condoned alleged meddling, Putin said, "No, we don’t encourage them and we don’t order them."

He said individuals – who could have been Russians but not government officials – could have sent information on the elections from anywhere around the world.

"You tell me they are Russians. So what? Maybe, being Russian, they were working for some kind of an American company," Putin said, adding there were 146 million Russians.

Speaking about the anti-Russia sanctions, the Russian head noted that they hadn't been imposed because of alleged Russian interference in the 2016 presidential election, but were aimed at containing Russia and its progress.

"Listen, sanctions have nothing to do with the myth of some Russian interference in the US election. Sanctions are about something else entirely: the desire to halt Russia’s progress, to contain Russia. This policy of containing Russia has been pursued for decades, on and off. Now it is back. It is a misguided policy, which not only affects Russian-US relations but also US businesses because it frees up space for their competitors on our market," Putin said.

"I think it is impossible to contain Russia anywhere. You need to understand this. Listen, you cannot even contain North Korea. What are you talking about? Why would you do that? Why do we have to contain, attack or cast suspicion on each other? We are offering cooperation," Putin said asked about whether Russia could be contained in cyber warfare.

Earlier this month, the White House announced that the punitive measures against Russia, imposed by the US government on March 6, March 16, March 20, and December 19, 2014 in the wake of Crimea's reunification with Russia and the Ukrainian crisis, would be extended for one more year.