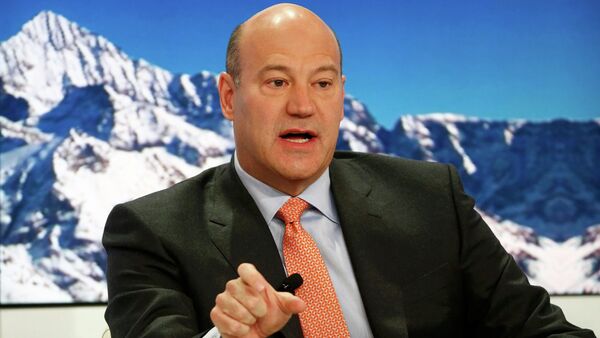 © REUTERS / Ruben Sprich
Subscribe
International
India
Africa
On Tuesday, ex-Goldman Sachs investment banker Gary Cohn resigned from his White House position as director of the National Economic Council after the commander-in-chief declared his intention to apply import tariffs to all aluminum and steel products entering the US.

Ted Rall, a columnist, editorial cartoonist and author, told Radio Sputnik's Loud & Clear that Cohn's resignation is just another example of the chaos in the Trump administration.

​On Tuesday, both Cohn and US President Donald Trump made glowing statements about each other in the latest White House departure, with Cohn expressing gratitude for the opportunity to contribute to the "historic tax reform" passed by the Trump administration last month and the president calling Gary a "rare talent" and commending him on a "superb job." However, the laudatory statements may only thinly veil a deeper divide.

Cohn came close to resigning in the aftermath of the white supremacist "Unite the Right" march in Charlottesville, Virginia, in August, that erupted into deadly violence. After the clash, in which anti-racist protester lost her life, Trump insisted there were "very fine people on both sides" of the two movements. However, their relationship appeared to smooth out soon after, and it appears tariffs are what finally pushed Cohn to resign.

"I don't think he was very pleased with the president's response to the Charlottesville debacle. This [tariff imposition] was the point of principle," Rall told Loud & Clear hosts Brian Becker and John Kiriakou.

"I am happy to see the resignation is based on principle. As far as we can tell, cabinet members and major political figures used to resign over policy issues. Under Reagan and all the way through Obama, for the most part, these figures were expected to be loyal soldiers [to the president,]" Rall explained.

"I think this is telling, that there is so much chaos in this White House. So many unqualified people have been chosen for positions they didn't belong in and now they are being either pushed out or running for the door. It is great this president can't govern for his agenda. It's a sight to see," Rall added.

National Security Adviser Lt. Gen. H.R. McMaster is also rumored to being leaving his position in the White House by the end of the month, according to multiple sources who claim the the relationship between the president and McMaster has been strained for months.

During a forum in Germany last month, McMaster claimed that evidence of Russian meddling in the 2016 US election was "incontrovertible," a remark that was quickly slammed by the president.

"General McMaster forgot to say that the results of the 2016 election were not impacted or changed by the Russians and that the only collusion was between Russia and Crooked H, the DNC and the Dems," Trump wrote on Twitter on February 17, with "Crooked H" referring to Hillary Clinton, his Democratic rival.