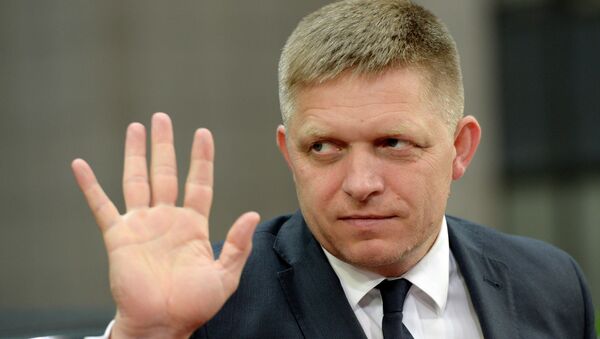 Earlier on Wednesday, Kiska began talks with the leaders of the opposition parties in order to help calm the unrest in the country, provoked by the murder of journalist Jan Kuciak.

"Does he [the president] want this country to have a coup?" Fico said.

The prime minister urged the president to respect the results of the elections that brought the current government to power.

Jan Kuciak, who investigated alleged ties between the mafia and the Slovak government, was found dead with his girlfriend in their home in late February. The country has been shaken and outraged, with thousands gathering for protest marches. On Sunday, Kiska called for a government reshuffle or a snap election in order to restore public trust in the authorities.

"It is quite telling that the person [the president] that is talking about the people distrusting the government and its institutions, is launching political negotiations to return the trust with a party established by a mafia member," Fico said.

The prime minister was referring to Boris Kollar, the head of We Are Family opposition party, whom media reports linked to the Slovak mafia.

The prime minister added that the investigation into the death of the journalist and his fiancee was the largest in Slovak history and that he trusted Tibor Gaspar, the president of the Slovak police.

Kollar, in turn, has said after a meeting with the president that his party supported the initiative of other opposition movements to propose a no-confidence motion.