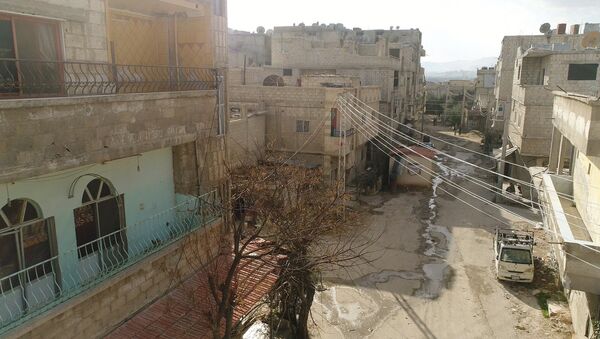 © Sputnik / Mikhail Alayeddin
/
Go to the mediabank
Subscribe
International
India
Africa
EASTERN GHOUTA (Syria) (Sputnik) - The shelling of the Syrian suburb of Damascus, Eastern Ghouta, continues, as the terrorists in the region refuse to give up and surrender.

The Syrian military has opened a humanitarian corridor in Eastern Ghouta not only for civilians, but also for militants who are allowed to leave the area together with their families, Russian center for Syrian reconciliation spokesman Maj. Gen. Vladimir Zolotukhin said Tuesday.

"Today, from 09:00 a.m. [07:00 GMT] to 02:00 p.m., the eighth 'humanitarian pause' took place. This time, the humanitarian corridor was opened not only for the civilians in Eastern Ghouta, but also for militants with their families. Members of illegal armed groups are allowed to carry personal weapons,” Zolotukhin told reporters.

Big Break: Syrian Army Advances Further in Ghouta Following String of Successes
According to the spokesman, the center has no records of any civilians leaving Eastern Ghouta during the eight humanitarian pause.

Zolotukhin also expressed hope that the decrease in shelling of the corridor's checkpoints may indicate that some militants are mulling to exit the combat zone, though the situation in the area of the humanitarian corridor still remains tense.

The spokesman stressed that the shelling of the Eastern Ghouta continues, as "yesterday morning, mortar fire targeted the Tishrin hospital in the village of Dahiyyat Al-Assad."

He also urged the terrorist leaders to cease hostilities, adhere to the truce and ensure the release of civilians or to leave Eastern Ghouta.

Earlier in the day, a Sputnik correspondent reported that the humanitarian convoy of the Syrian Arab Red Crescent that delivered aid to the residents of the town of Douma on Monday arrived at the Muhayam-Al-Wafedin checkpoint bringing 13 evacuees from Eastern Ghouta.

US Accuses Russia of Alleged Ceasefire Violation in Eastern Ghouta
The militants in Eastern Ghouta have intensified the shelling of Damascus and the Muhayam-Al-Wafedin humanitarian corridor from the territory controlled by the Jaysh al-Islam militants despite of the resolution stipulating a 30-days ceasefire in Syria.

The resolution 2401 was unanimously adopted by the UN Security Council on February 24 to ensure the safety of humanitarian aid and the medical evacuation of those injured. Russia has repeatedly urged the West to assist in observing the truce conditions, despite the fact that the humanitarian pauses in besieged area are being broken by militants in violation of the UNSC's resolution.