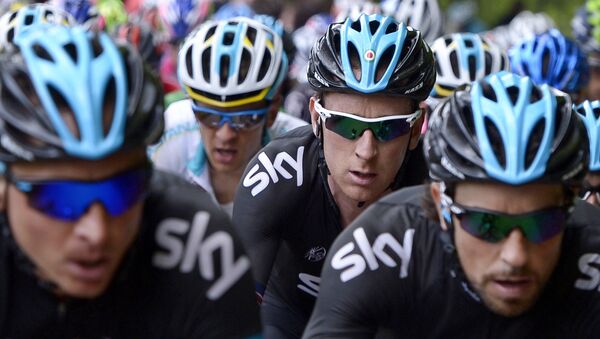 The Digital, Culture, Media and Sport (DCMS) select committee report on 'Combatting doping in sport' published on Monday, March 5 concluded a powerful corticosteroid, triamcinolone, was being used "to prepare Bradley Wiggins, and possibly other riders supporting him, for the Tour de France.

"The purpose of this was not to treat medical need, but to improve his power to weight ratio ahead of the race."

A mysterious package was delivered to Wiggins at the June 2011 Criterium du Dauphine race but the British parliamentary committee found no "reliable evidence" to support Sky's assertion that it was a legal decongestant.

"The Report also makes the serious claim that medication has been used by the Team to enhance performance. We strongly refute this. The report also includes an allegation of widespread Triamcinolone use by Team Sky riders ahead of the 2012 Tour de France. Again, we strongly refute this allegation. We are surprised and disappointed that the Committee has chosen to present an anonymous and potentially malicious claim in this way, without presenting any evidence or giving us an opportunity to respond. This is unfair both to the Team and to the riders in question."

I find it so sad that accusations can be made, where people can be accused of things they have never done which are then regarded as facts. I strongly refute the claim that any drug was used without medical need. I hope to have my say in the next few days & put my side across.

Cycling fans, sport lovers and other social media users reacted to the news, with some branding the British team #TeamSly.

interesting that you talk of evidence yet failed to provide the same when asked. Maybe the anonymous evidence got stolen in Greece? it happens apparently… #doping #TeamSalbutamol #TeamSly

Close to losing all my respect for the team. Feeling really let down and disappointed.

Sort it out guys…need a serious response to this..not something that makes you look like a mickey mouse outfit

Others called the report baseless and inconclusive.

Close to losing all my respect for the team. Feeling really let down and disappointed.

Due to suffering from asthma, Sir Bradley Wiggins had been granted a therapeutic use exemption (TUE) for the banned anti-inflammatory ahead of the 2012 Tour.

The report has called for legislation to criminalize the supply of drugs to sports people with intent to enhance performance and stressed that UK Anti-Doping organization requires greater powers and resources to conduct investigations and enforce the rules.