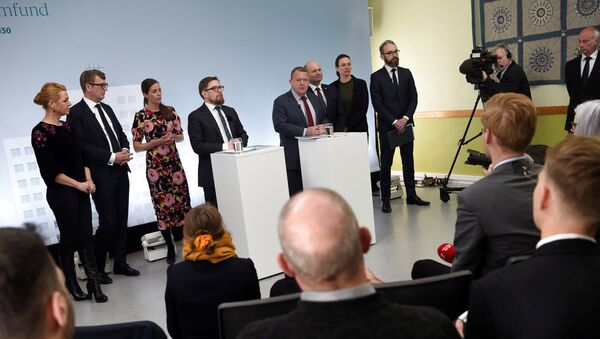 The plan, presented by eight ministers, involves a series of drastic measures, such as doubling penalties for ghetto dwellers and inciting protests in the affected areas.

In a symbolic gesture, the much-debated plan called "A Denmark without parallel societies," aimed at tackling social problems in blighted areas from the officially defined "ghetto list" was presented in the notorious Mjølnerparken area of Copenhagen, sparking controversy, the daily newspaper Politiken reported.

The plan, published on the government's webpage, aims at eradicating the country's 21 official ghettos by 2030.

Although Prime Minister Lars Løkke Rasmussen stressed that the plan was neither about race or religion, he also argued that too many Danish residents of non-Western backgrounds were not contributing to society, which the Danish government was not prepared to accept. Rasmussen argued that this trend must be reversed.

"We should be able to recognize our country. There are places where I don't recognize what I'm seeing," Rasmussen said, solemnly presenting the plan alongside seven other ministers.

The Danish government plans to let the police define zones in which punishment for certain crimes, such as vandalism, theft and threatening behavior, can be doubled. The very idea of double-punishment has triggered strong criticism from politicians, legal experts and ghetto dwellers alike.

Birgitte Arent Eiriksson, legal advisor with the Justitia think-tank, argued that the measure could represent a gamble with the rule of law in the Nordic country.

Muhammad Aslam, local chairman at Mjølnerparken, argued the government's proposal signals that all are not equal before the law.

"Apparently there are class A and class B members of our society," Aslam told Danish Radio, calling it an attack on certain districts.

​Another important part of the plan involves criminalizing so-called "re-acculturation trips," which the Immigration Ministry defines as "sending minors abroad to their parents' homeland against their will." This is a frequent phenomenon in other Nordic countries, where immigrants' children are sent to their parents' homelands to strengthen their cultural identity, family relations or language skills. In Denmark, such an enterprise may cost parents up to four years in prison, according to the plan.

By contrast, financial bonuses will be provided to non-Western immigrants for achieving educational improvements or getting jobs.

In addition, the government also announced it wants to set aside DKK 12 billion kroner ($2 billion) euros) to demolish and regenerate housing in underprivileged areas between 2019 and 2026. A person on social support who moves to a ghetto will see their income payments reduced. Similarly, municipalities will not be allowed to move people on state benefits into these areas. The new legislation will allow housing companies to refuse and evict tenants with certain types of convictions.

The presentation of the plan, however, met a strong response from the inhabitants of Mjølnerparken, an area directly where 82 percent of the population is non-Danish and where unemployment exceeds 40 percent, and therefore directly affected by the plan. Around 70 people took part in the protest, including Uffe Elbæk, leader of the environmentalist Alternative party. The banner-waving protesters accused the government of punishing and discriminating against people based on where they live. The crowd's shouts particularly targeted Immigration Minister Inger Støjberg, a figure largely unpopular for her hardline stance.