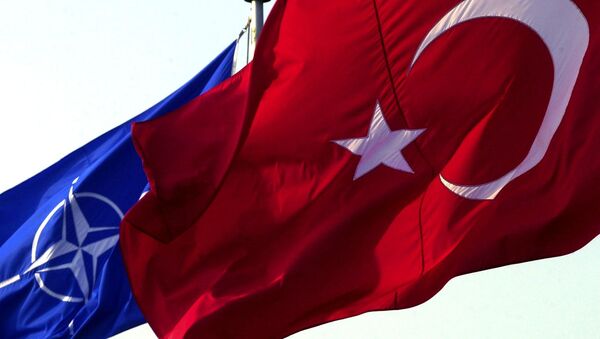 © AFP 2022 / BENOIT DOPPAGNE / BELGA
Subscribe
A member of the Turkish parliament from the leading opposition party - the Republican People’s Party (CHP) - Utku Çakırözer, took part in the joint session of the NATO Parliamentary Assembly in Brussels last week as a representative of the Turkish delegation. He shared his impressions on the meeting with Sputnik.

“It seems to me that in the perception and assessment of the [terrorist] threat by the Alliance, the situation in Afghanistan plays the key role now. In addition, despite the fact that positions of such radical terrorist organizations as Daesh and Al-Qaeda in Syria and Iraq have been significantly undermined by the fight against them, they continue to pose a serious threat to global security from NATO's standpoint. The Assembly also discussed NATO peacekeeping missions in the Balkans, as well as analyzed and assessed new global threats,” said Çakırözer.

According to the Turkish MP, during the meeting, it was stressed that despite the weakening of Daesh positions, the group has not been completely destroyed and is developing new forms and strategies for striking around the world.

“According to preliminary estimates, in 2017 this organization carried out around five thousand terrorist acts around the world. It's lost its former strength, but its capabilities of still being able to carry out such attacks are very troubling for all of us,” Çakırözer explained.

According to the parliamentarian, during the meeting in Brussels, it was noted that Daesh is developing new strategies, focusing on the organization of cyber attacks, terrorist attacks using drones, which are carried out by local cells based in different countries without the direct involvement of any central structure.

“We have seen examples of this in Turkey. The so-called 'lone wolves' wait for months and even years, preparing to attack, and then strike at the most unexpected moment. Judging by what we've heard at the meeting in Brussels, NATO focuses on measures that can prevent such situations and related risks,” explained Çakırözer.

Answering a question about whether the Turkish operation “Olive Branch” was on the agenda during the NATO Assembly in Brussels and how Turkey's NATO allies see the activities of the Kurdish Democratic Union Party and the Kurdish People’s Protection Units (YPG) in Syria, which Turkey considers terrorist organizations, Çakırözer said:

“During the meeting, I concluded that, despite the fact that NATO is part of the anti-terrorist coalition in Syria, the Syrian issue is not a top priority for the Alliance. We noticed that within the Alliance there is no consensus on the terrorist direction of the YPG. Of course, when it comes to  cooperation between NATO and Turkey, the Alliance representatives say that they understand Ankara's concern about the security of the border and support it in this. However, I did not notice that these statements were somehow transformed into a concrete decision by NATO about joint actions with Turkey in the region.During my speech at the meeting, I openly stated the necessity on the part of NATO to make sure Turkey, the Turkish people, are able to restore their confidence in the Alliance.

"NATO allies, not just by words, but by concrete actions must show that they understand Turkey's concerns. In particular, I stated the need to help in eliminating the threat of terrorism in Turkey, which comes from Syrian territory, from the Kurdistan Workers' Party (PKK) and the YPG,” concluded Çakırözer.

On Monday, Turkey said its army had taken control of the border strip inside Syria's Afrin, and that it was preparing for a “new battle” by deploying police special forces.