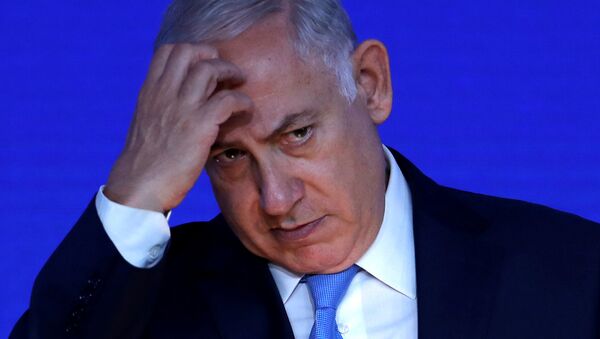 With a former director of Israel's Communications Ministry agreeing to testify against Benjamin Netanyahu as part of ongoing corruption investigations, Sputnik spoke with Daniel Levy, President of the US / Middle East Project to take a look at whether the Israeli Prime Minister will be forced from office.

Sputnik: Has Netanyahu lost the support of the Likud Party?

Daniel Levy: The mood in Israel is that this could be the straw that broke the camel’s back. This could be the turning point in terms of how overwhelming the evidence could be.

A couple of more things need to happen, further recommendations seem likely and would need to be made to the attorney general  in this additional case regarding the communications ministry. The attorney general has to decide whether to indict or not and then a legal court case will be set in motion.

Corruption Investigation: Israel’s Probe of Netanyahu Widens
At what stage does the Likud party and/or his coalition partners decide that he is more of a liability than an asset and do they abandon him?

That doesn’t play out to the same time line as the legal time line, so far they have not abandoned him, the political base is with him, but that is now facing a more severe test and scrutiny than at any previous moment.

Sputnik: Could Netanyahu be re-elected?

Daniel Levy: For Netanyahu to come out not guilty, it will take some time. Before we get to any court case, the question is, does Netanyahu lose his party, and does he decide to step down, which I personally think is unlikely, or does he go to early elections?

This is the order that will most likely happen and Netanyahu has claimed on numerous occasions that this is a conspiracy against him, that he’ll go and win the election and then challenge the legal system to challenge him, whilst he retains the support of the Israeli people. This is the dynamic that’s in play.

Israeli Attorney General Ready to Indict PM Netanyahu 'Without Hesitation'
If he were to go through the process and come out not guilty, then by all means he could retain public support, the more likely questions is, can he carry that support during the investigation process against him.

Daniel Levy: So much depends on the successor; if his successor is from the Likud party or if his removal is followed up by an election. Right now, nobody who stands a chance at becoming Prime Minister is offering a different outlook on regional foreign policy.