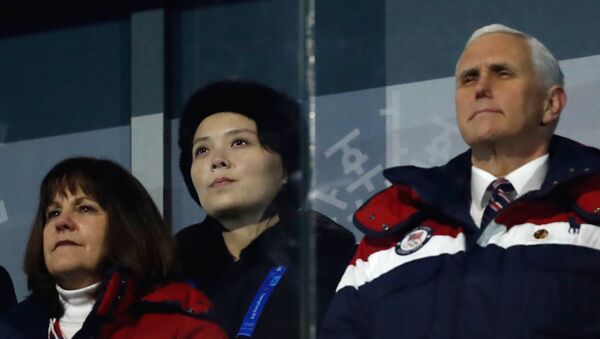 Pyongyang "dangled a meeting in hopes of the Vice President softening his message, which would have ceded the world stage for their propaganda during the Olympics," Pence's Chief of Staff Nick Ayers said in a statement.

But then Pyongyang's representatives backed off, said Ayers. According to the Washington Post, which broke the story, the meeting was cancelled with only two hours' notice.

In any event, "North Korea watchers [were] quite skeptical" that Pence's attendance at the Olympics would "lead to any significant breakthroughs," said Susan Glasser, Politico's chief international affairs columnist, on February 16.

Some critics bashed Pence for sitting near Kim's sister, Kim Yo-jung, without greeting her. "For Pence and his wife to… essentially ignore it was an embarrassment for the United States," Bruce Gagnon, coordinator of the Global Network Against Weapons and Nuclear Power in Space, told Sputnik last week.

"[A]s we've said from day one about the trip: this administration will stand in the way of Kim's desire to whitewash their murderous regime with nice photo ops at the Olympics. Perhaps that's why they walked away from a meeting or perhaps they were never sincere about sitting down," Ayers said.