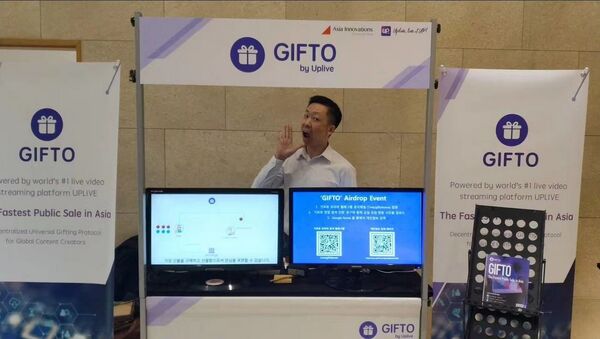 © Photo : andytian-GIFTO / twitter
Subscribe
International
India
Africa
Remember how much fun it was when the family used to get together and swap gifts? Paradoxically enough, social media platforms that are theoretically designed to bring kindred souls closer are, in reality, pushing us further apart.

And the advent of new technology means that, at least for the time being, consumers are en masse shifting to virtual gifts, be it an e-ticket for an event or a virtual bunch of flowers that can be stored on your desktop.

The Uplive App and Gifto, its crypto brainchild, are here to feed this growing demand. Even the word itself sounds right – "Gifto", since this is a newly devised cryptocurrency to serve the already existing Taiwan-based Uplive App, which allows users to send virtual gifts purchased with conventional money.

Just to note, Uplive is somewhere midway between YouTube and Snapchat, which facilitates storage, trade and exchange of purchased presents in a virtual market.

Create your own customized Valentine’s gift with GIFTO! 🎊
Bored of chocolate and roses? This Valentine, till Feb 28, GIFTO brings you something totally customized, last forever, and better than diamonds. 😍
More info here: https://t.co/bhysa8KjLm pic.twitter.com/KzvcJGwKUP

Now Uplive will plunge into the cryptocurrency world, with the help of Gifto tokens, with a whole team of all-star advisors working on them- top executives of Kyber Network, NEO, Bloaksheer, Tron and the ex-CFO of TenX.

The new platform, which is even referred to as the Gifto Ecosystem, will focus on facilitating virtual gifts to be purchased and sent across all social media platforms.

To prove that virtual gifts also have a real value, Gifto recently partnered with a digital artist Kevin Abosch. Their joint venture, the so-called "Forever Rose" was auctioned around Valentine’s Day for a whopping $1 million to a group of 10 collectors, making it the world’s most costly crypto-artwork to date. This makes it really hard to deny the great potential of Gifto, doesn’t it?

The world's most valuable crypto artwork: proof of love on the blockchain by @kevinabosch. Thank you @CNN for supporting the forever rose project 🌹https://t.co/juXeAfaTps pic.twitter.com/nynNja9VBH

"People traditionally have valued things they can see and feel. But some of the most valuable things — like love, for example — can be felt but not seen," the artist told CNN. "Art reduced to its core essence is about the idea."

Since its release in December 2017, Gifto (GTO) prices have performed really well. For the time being, a GIFTO Token is going for $0.397604 USD, which is 39% increase from its initial offering price of about $0.3 USD per token.