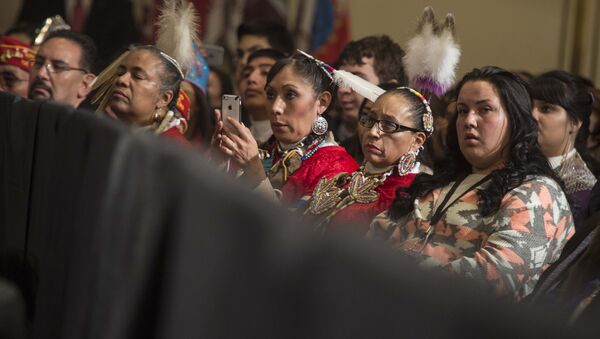 "In exchange for federal protection and the promise of certain benefits, our ancestors gave forever to the people of the United States title to the very soil of our beloved country," Keel said. "To settle the process for admission of new states, the 13 original states agreed to transfer western land claims to the United States under the principles in the Northwest Ordinance. We have never asked anything except that these protections be continued. Today, the federal government is threatening to limit this protection and these benefits."

Keel said the "proposed budget cuts to tribal governmental services, if enacted, would represent a clear retreat from the federal commitments and treaty promises made to tribes." The NCAI president also said budget would cut funding for the Bureau of Indian Affairs (BIA) by about half billion dollars, reduce BIA social services by more than 30 percent and Indian Child Welfare by more than 25 percent.

Moreover, human services programs, law enforcement and court programs, housing and education programs would also see significant reductions under the proposed budget, while infrastructure programs such as the Indian Community Development Block Grant would be eliminated.

"When tribal nations agreed to accept a smaller land base, the federal government promised to safeguard our right to govern ourselves and to enable tribal governments to deliver essential services, and provide them resources to do so effectively," Keel said. "That is the trust relationship embodied in the US constitution. Congress and the administration are responsible for carrying out that trust in the federal budget."

On Monday, the White House released the Trump administration’s budget proposal for fiscal year 2019. The administration submitted the $4.4-trillion budget proposal to Congress that calls for significant increases in defense expenditures, reductions in diplomatic spending and cutting funding for health care and other social programs.

Established in 1944, the National Congress of American Indians is the oldest and largest non-profit organization representing native tribes and the interests of tribal governments and communities in the United States.