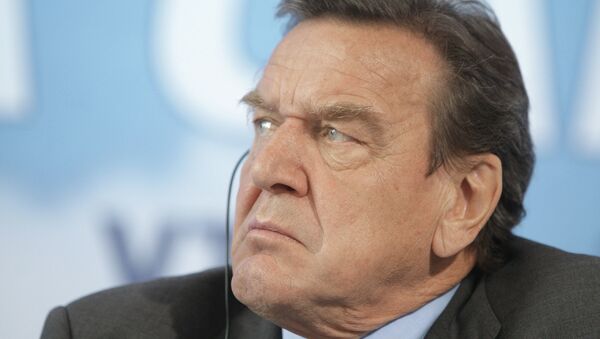 © Sputnik / Alexei Druzhinin
/
Go to the mediabank
Subscribe
International
India
Africa
Former German Chancellor Gerhard Schroeder visited South Korea during the first days of the Winter Olympic Games in Pyeongchang. After his trip, the politician confessed that he was annoyed by US Vice President Mike Pence's behavior. Here's why.

According to German newspaper Die Welt, the remark was made regarding the fact that Pence had ostentatiously avoided contact with North Korea's officials who also attended the opening ceremony, including Kim Yo-jong, the younger sister of North Korean Supreme Leader Kim Jong-Un.

At the same time, before his return flight from South Korea to the US, Pence had declared that the US was ready to conduct direct talks with North Korea.

READ MORE: Kim Jong-Un's Sister 'Could Have Been Ideal Person for Talks' With US — Analyst

Pence also said in an interview with The Washington Post, published Sunday, that the Trump administration will go on with its strategy of "maximum pressure and engagement at the same time" with regard to North Korea, but noted that Washington was also open to direct diplomatic discussion.

"The point is, no pressure comes off until they are actually doing something that the alliance believes represents a meaningful step toward denuclearization," Pence told the newspaper. "So the maximum pressure campaign is going to continue and intensify. But if you want to talk, we'll talk."

At the same time, the US official noted that his statement doesn't mean any change in the previous political course toward North Korea. On Wednesday last week, he said that the United States would soon roll out its "toughest and most aggressive" round of economic sanctions to ensure the denuclearization of the DPRK.