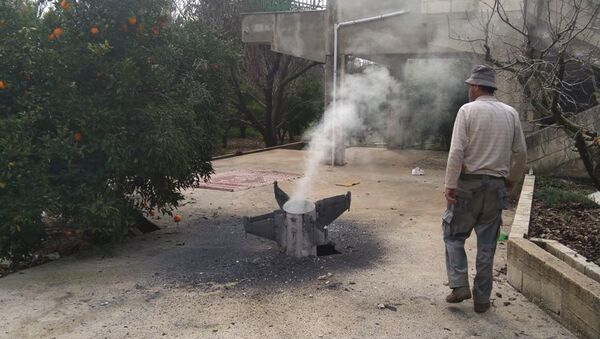 © AP Photo
Subscribe
On February 10, Israel reported that one of its helicopters downed an Iranian drone launched from Syrian territory, and that the Israeli Air Force (IAF) had hit several military targets in Syria, prompting retaliatory fire from Syrian air defense systems.

On Saturday, the Israeli Defense Force claimed that an Apache attack helicopter intercepted an Iranian drone infiltrating the disputed area of Golan Heights, which has been at the center of conflict between Syria and Israel. The alleged footage of the attack, what the Israeli military said, was a strike against Iranian targets in Syria, was tweeted by the IDF’s spokesman, Jonathan Conricus.

Original footage showing #Iranian UAV infiltrating and then shot down over Israel, and #IDF strike on Iranian command vehicle in #Syria pic.twitter.com/Sz6poAOdjc

The Israeli aircraft was said to have crossed into Syrian territory to destroy the command post that was used to control the alleged Iranian drone. Following the incident, Syrian state-run agency SANA reported that the country’s air defense systems had opened fire on Israel. Israeli media outlet Haaretz reported later, citing sources that Israeli missiles had targeted a "research center," located north of Damascus.

This is the Iranian UAV that infiltrated Israeli territory early this morning pic.twitter.com/R1cfL4v5dF

Syria’s air defenses managed to hit several aircrafts and triggered air raid sirens. An F-16 fighter jet came down in northern Israel, with its two pilots managing to bail out of the plane. One of the pilots was severely injured, while the second received only slight injuries, according to The Times of Israel.

This morning, an IAF pilot was severely injured as a result of an emergency evacuation from an IAF aircraft. The pilot was evacuated to the hospital for medical treatment. The incident is being reviewed. The family has been notified.

The circumstances surrounding the incident remain rather vague and offer multiple versions of the crash; an initial Israeli Air Force investigation has suggested that it was prompted by an explosion of an anti-aircraft missile next to the plane, but not necessarily from a direct hit.

The investigation is still underway, yet the army spokesperson emphasized that “even if it [the jet] was hit by fragments, that’s still because of the missile.”

If the plane was in fact brought down by Syria, it would mark the first such incident since the 1982 Lebanon War.

Conricus stressed that Israel was not interested in escalating tensions in, claiming that the airstrikes on its territory were defensive in nature.

"Syrians and Iranians, from our point of view, are playing with fire. Syrians — when they allow the Iranians to attack Israel from their territory. We are full of determination, ready and able to make everyone who tries to attack us pay a high price."

Israel’s Prime Minister Benjamin Netanyahu said that his country would do “whatever is necessary” to defend itself against aggression, stressing that he held Iran and “its Syrian hosts” responsible for the latest developments.

I have been warning for some time about the dangers of Iran’s military entrenchment in Syria. Iran seeks to use Syrian territory to attack Israel for its professed goal of destroying Israel. pic.twitter.com/bfWinriX3h

This morning Iran brazenly violated Israel’s sovereignty. They dispatched an Iranian drone from Syrian territory into Israel.
And this demonstrates that our warnings were 100% correct.

Israel holds Iran and its Syrian hosts responsible for today’s aggression. We will continue to do whatever is necessary to protect our sovereignty and our security.

What Does Iran Say?

While the Israeli military has claimed that the unmanned aerial vehicle they had intercepted was Iranian, Tehran has firmly denied the allegations.

Russia Urges to Avoid Further Escalation, US Supports Israel’s Right to Defend Itself

While the Russian Foreign Ministry has urged the international community to respect Syria’s territorial integrity and sovereignty, calling on both sides to exercise restraint and avoid further confrontation:

…the Pentagon has supported Israel’s right to defend itself against threats to its national security:

"Israel is our [US] closest security partner in the region and we [ the US] fully support Israel's inherent right to defend itself against threats to its territory and its people," Pentagon spokesman Adrian Rankine-Galloway said.

Russian President Vladimir Putin and Israeli Prime Minister Benjamin Netanyahu held a phone conversation to discuss the latest developments around "the actions of the Israeli Air Force, which delivered missile strikes of targets in Syria," the Kremlin press service stated.

"The Russian side spoke out in favor of avoiding any steps that could lead to a new round of dangerous confrontation in the region," it added.

Netanyahu, for his part, said that Israel had the right to self-defense, and stressed that Moscow and Tel Aviv agreed "coordination between our armies would continue."

The US State Department spokeswoman Heather Nauert said that the United States considered the incident on the Israeli-Syrian border Iran's "calculated escalation."

The Russian Foreign Ministry also noted the necessity of keeping the process of de-escalation in Syria going, and not to exacerbate the situation in the Middle East.

The Pentagon, for its part, added that the US Department of Defense “did not participate in this military operation,” and expressed its concerns over Iran’s “destabilizing activities” in the region.

Israel and Syria, which have never signed a peace treaty, and have a long history of tough disagreements over the Golan Heights, have repeatedly exchanged fire, with the latest incident taking place in early January, when the Syrian government’s army thwarted three Israeli missile attacks on Damascus province. In response, Damascus accused Tel Aviv of cooperating with terrorist groups, claiming that Israel “posed a threat to global security and peace on par with Daesh (ISIS) and Jabhat Fatah al-Sham (formerly known as Jabhat al-Nusra).

The Syrian Foreign Ministry also penned a letter to UN Secretary General Antonio Guterres and another to the UN Security Council.