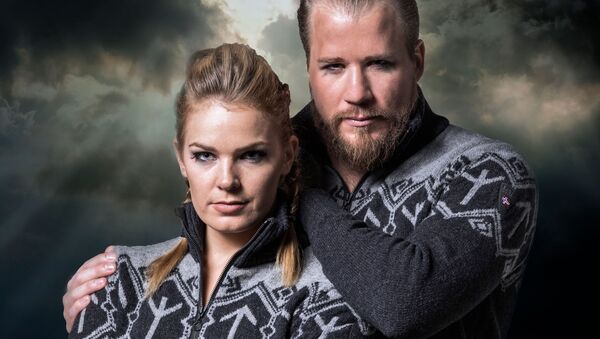 © Photo : Dale of Norway
Subscribe
The ancient runic symbol "tyr," prominent on Norway's new Olympic uniform, has been earning Oslo some bad press, as viewers recall that the symbol was once appropriated by Nazi leader Adolf Hitler and is now being used by local extremists.

The Norwegian Alpine skiing team has been giving up their ”Attacking Viking” sweaters designed for the Olympic season because of media concerns that their runic pattern and the tyr symbol alludes to Nazism. Kristin Lysdahl, who will represent Norway’s downhill team in the Olympic Games in South Korea, has said that “none of us use it in front of reporters." Jonathan Nordbotten, a member of the men’s World Cup team who will also be competing in Pyeongchang, has also confirmed that “no one on our team uses that sweater anymore.”

Swedes Rethink Ikea as Its Late Founder's Nazi Past, Tax-Dodging Pop Up
The manufacturer, Dale of Norway, chose the rune tyr for the Olympic season collection "The Attacking Viking" as an homage to team’s nickname and, obviously, the country's Scandinavian heritage. Tyr is in essence an ancient Nordic symbol associated with the god of victory. As it long predates the rise of the Nazis, the symbol isn't considered to be Nazis property, so to speak, in the country. But like many runic emblems, it was appropriated by Hitler’s Germany for leadership schools of the Third Reich. Later, tyr was put onto banners by a far-right organization in Scandinavia, the Nordic Resistance Movement, viewed by the local police as a violent extreme group and potential public threat. This association also didn't help when the photos of athletes wearing the uniform with tyr went online.

​However, the Norwegian Ski Federation has left the right to decide whether to wear the design up to each athlete individually. Athletes can switch to a neutral "Olympic Passion" collection, also designed for the Norwegian Olympic team, if they choose.

American Woman Sued for Calling German Police ‘Nazis’
Dale of Norway has rejected any connection to the far right movement and hasn’t removed the sweaters from the line, although they expressed disappointment at the coincidence.

Nevertheless, fears that far-right activists might begin appearing at rallies wearing the Olympic jumpers made one of the country’s major wholesalers stop selling the sweaters.

The decision to dump the design has reportedly induced especially strong criticism among neo-pagans, Viking reenactors and fans of the national ski team for "giving up" the collective ownership of ancestral symbols to a tiny, unrepresentative minority.

000000
Popular comments
This is not the only ancient symbol which was appropriated by the third reich. People should reclaim their cultural heritage and not be shamed into surrendering it.
Medvezhonok
31 January 2018, 23:17 GMT
000000
We're all getting tired of the Nazi's being used to excuse repression, anti-white violence and general whining. Coming on to 80 years and fewer folks alive who were around back then every year. How about being motivated and incensed by the millions of people the US has condemned to death by their war mongering all over the world. The US by some figures has killed 25-30 million since the end of WWII and I'd like to hear about that not the bloody Nazi's.
JadedFlower
5 February 2018, 12:10 GMT
000000
Newsfeed
0
New firstOld first
loader
LIVE
Заголовок открываемого материала
Access to the chat has been blocked for violating the rules . You will be able to participate again through:∞. If you do not agree with the blocking, please use the feedback form
The discussion is closed. You can participate in the discussion within 24 hours after the publication of the article.
To participate in the discussion
log in or register
loader
Chats
Заголовок открываемого материала
Worldwide
InternationalEnglishEnglishMundoEspañolSpanish
Europe
DeutschlandDeutschGermanFranceFrançaisFrenchΕλλάδαΕλληνικάGreekItaliaItalianoItalianČeská republikaČeštinaCzechPolskaPolskiPolishСрбиjаСрпскиSerbianLatvijaLatviešuLatvianLietuvaLietuviųLithuanianMoldovaMoldoveneascăMoldavianБеларусьБеларускiBelarusian
Transcaucasia
ԱրմենիաՀայերենArmenianАҧсныАҧсышәалаAbkhazХуссар ИрыстонИронауОssetianსაქართველოქართულიGeorgianAzərbaycanАzərbaycancaAzerbaijani
Middle East
Sputnik عربيArabicArabicTürkiyeTürkçeTurkishSputnik ایرانPersianPersianSputnik افغانستانDariDari
Central Asia
ҚазақстанҚазақ тіліKazakhКыргызстанКыргызчаKyrgyzOʻzbekistonЎзбекчаUzbekТоҷикистонТоҷикӣTajik
East & Southeast Asia
Việt NamTiếng ViệtVietnamese日本日本語Japanese俄罗斯卫星通讯社中文（简体）Chinese (simplified)俄罗斯卫星通讯社中文（繁体）Chinese (traditional)
South America
BrasilPortuguêsPortuguese
NewsfeedBreaking
21:07 GMTBoris Johnson Contradicts Joe Biden With Claim of Intelligence That the Taliban Could Take Kabul
21:05 GMTPelosi Accuses GOP of ‘Trying to Force First-Ever US Default’ by Opposing Limit Suspension Bill
20:53 GMTFamily Lawyer Confirms Human Remains Found in Wyoming Belong to Gabby Petito
20:26 GMTFrench President Macron's Health Pass QR-Code Leaked to Internet - Reports
19:37 GMTThe US Space Force’s Oldest Adversary, Social Media, Roasts Their New Uniforms
19:25 GMTTraffic on Motorway in German Bavaria Halted Due to Armed Hostage-Taking Situation - Reports
19:24 GMTJoe Biden, DHS Chief Upset by 'Horrible' Videos of Border Patrol Dealing With Haitian Migrants
19:24 GMTBiden Believes Footage From US-Mexico Border ‘Horrific’ and Supports Probe
19:15 GMTSoldiers Killed in Galwan Valley Clash With India Now Part of Patriotism Lessons for Kids in China
19:14 GMT‘An Unpredictable Ally’: Does the AUKUS Pact Undermine the Quad's Significance?
19:11 GMTSearch for Fiancé of Gabby Petito, Brian Laundrie, Resumes in Florida Wilderness
18:54 GMTFrench Defenсe Minister Says US Instigating Confrontation With China
18:48 GMTNew ‘Storytelling’ in Skripal, Litvinenko Cases Meant to 'Sabotage' Effort to End Russia-UK Cold War
18:40 GMTTexas Governor Says Biden Has Not Granted Federal Emergency Declaration Over Border Crisis
18:39 GMTWoman Claims US Billionaire Leon Black Raped Her in Jeffrey Epstein’s Townhouse, Media Says
18:29 GMTMigrants Escape After Overtaking Transport Bus
18:08 GMTVolcano Continues to Erupt on Spanish Island of La Palma
17:49 GMT'US Hegemonic System' Has 'Failed Miserably', Iran's Raisi Tells UN
17:24 GMTUSAF Reveals It Has Five New B-21 Strat Bombers in Production, Not Two as Originally Reported
17:07 GMTAncient Pyramid Made From Volcanic Ash Likely Built to 'Calm Earth’s Anger,' Media Says