'At This Point, US Has No Concrete Strategy in Afghanistan' – Analyst 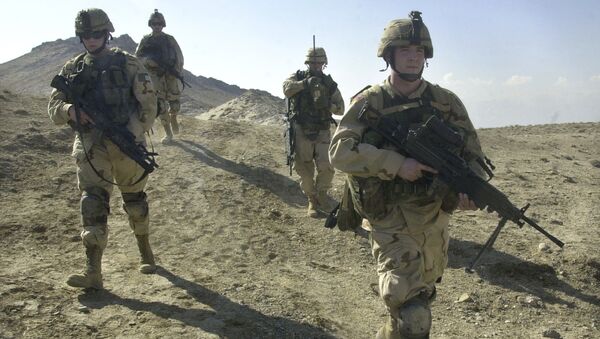 © AP Photo / Aaron Favila
Subscribe
Amid growing Taliban influence and brazen Daesh attacks on the Afghan capital, US forces in Afghanistan have faced a 35% jump in casualties over the past year. Speaking to Sputnik, national security analyst Joseph Fitsanakis outlined the problems faced by the US-led coalition, and explained what it would take for peace to return to the country.

Speaking to Radio Sputnik, Dr. Fitsanakis, a professor at the intelligence and national security studies program at Coastal Carolina University, South Carolina, outlined why Washington's position was unenviable, to say the least.

Sputnik: Some experts have said that Trump’s recent remarks rejecting peace talks with the Taliban suggest that he sees a military victory over the group being possible. Do you think this is likely? And a follow-up: Is victory possible with the resources and manpower the president has authorized?

Dr. Joseph Fitsanakis: President Trump has increased the number of US troops in Afghanistan from about 8,000 or so to 14,000 there currently, and he's said that he wants to send another 1,000. Having said that, let's remember that in 2010, the US had in Afghanistan about 100,000 troops, and this was not enough to actually score a victory against the Taliban, against the terrorists there at the time. So why would anybody think that 15,000 troops would be enough to do that?

Verbal History: Evolution of US Government Rhetoric Toward Taliban
Sputnik: The US has been involved in fighting in the country for over fifteen years. Many believe that the US-led coalition has not made a significant impact on the number of terrorists, and that they are in fact growing stronger. What are your thoughts on that?

Dr. Joseph Fitsanakis: We can see the results. Currently, by all accounts, the Taliban controls about one third of Afghanistan. It's stronger now than it has in the last ten years for sure. In addition to that, you've got ISIS [Daesh] there now, that is also active. [The terror group] last year alone claimed about 15 bombings across the country.

I wouldn't say that the Taliban has the chance to take over Afghanistan. It's not strong enough to do so, plus it doesn't have that much support by the local population. Having said that, the last week or so has shown that really, nobody is safe in the country. There's no way out of this that doesn't involve some kind of a settlement with the Taliban in particular, in the immediate future.

Sputnik: Not so long ago, when Donald Trump first authorized additional troops, he wanted to force the Taliban to negotiate for a political settlement. Why now do we see this change of course, and why is he refusing to negotiate with them, do you think?

Dr. Joseph Fitsanakis: I don't think we can say with certainty what Trump's intentions are in Afghanistan, because he's a kind of president that thinks to change his mind, or change his rhetoric on a regular basis. I think that that is the primary cause of the attacks which we've seen in the past week in Afghanistan. The Taliban wants to ensure that [Trump] negotiates with them, which is why they're trying to show him, to the American-led coalition and to the Afghan government that they're able to strike at anytime, anywhere in the country.

The general sense in the country now is that nobody is safe. [The Taliban] want to create that impression so as to appear strong enough when and if they happen to be called to the negotiating table with the American-led coalition.

Pentagon: New 'Tactical' Status Puts US Military Advisers at Risk in Afghanistan
Sputnik: What do you think the US aim is in staying in the country?

Dr. Joseph Fitsanakis: I really don't think that the US at this point has any concrete strategy of what it wants to achieve in Afghanistan. The numbers of US troops are not even remotely sufficient to secure the country. In fact they never have been, and the US has never been serious enough about achieving the stabilization of Afghanistan.

If one were serious about stabilizing it using a military force, we're talking about having at least a quarter million troops, if not closer to a million, if you're serious about this. At this point, nobody in Washington or among the US population has the will to do something like that. Trump is aware of that. At the same time though, he is the kind of president who wants to appear strong. He doesn't want to be seen as failing in his international obligations. So it's a very polarized image…

Sputnik: How would you describe US policy and strategy in Afghanistan, given that they don't have a sufficient presence? What exactly is it that they're doing?

Dr. Joseph Fitsanakis: I think you can analyze US policy in the country on two main parameters. One is the military parameter, which we've done [above, while the other] has to do with the Afghan government that the US currently supports.

Activist: European Deportations, US War Effort Threaten Afghan Lives
There's no question that President Ashraf Ghani presides over a coalition of forces in the country which is plagued by all kinds of infighting, all kinds of rivalries between them; they are corrupt, and the Afghan people are aware of that. The Afghan security forces led by president Ghani are severely understaffed, themselves corrupt, and weak. It really is a desperate image, and again, there is no clear end in sight. I'm not sure what Washington has in mind in regards to US policy in Afghanistan.

Sputnik: Isn't it quite paradoxical that the Taliban, which claims to represent so many people, is killing so many at the same time? What is it that they want?

Dr. Joseph Fitsanakis: Basically, in a war situation like this, most people will side with whatever actor ensures their security and safety. The Taliban's message is that so long as the Americans are here, so long as there is a government in Kabul that is controlled by the United States and the US-led coalition, the war will not end.

The Daesh (ISIS) terrorist group has claimed responsibility for Monday's attack on the Marshal Fahim Military Academy in Kabul, which killed nearly a dozen cadets and left close to a dozen others injured. The attack followed on a separate deadly attack on the capital over the weekend, in which up to 100 people were killed after an ambulance filled with explosives was blown up in a crowded city street. Days earlier, 22 people were killed in a Taliban attack on a hotel in the capital. The marked increase in attacks was complimented by a report in the Wall Street Journal which recorded a 35% increase in US military casualties in Afghanistan over the past year.

The views and opinions expressed by Dr. Joseph Fitsanakis are those of the expert and do not necessarily reflect those of Sputnik.

000000
Popular comments
Quarter of a million troops to "stabilize"? that sounds like an occupational force to impose foreign will on the people. I wish people stopped going for euphemisms like this. Read as: Quarter of a million foreign troops to establish control of the USA puppet government over all regions of Afghanistan, and for an indefinite duration as the gorenmnet has no local support.