Tic-Toc - It's Your Doomsday Clock: How The Global Disaster Compass Works 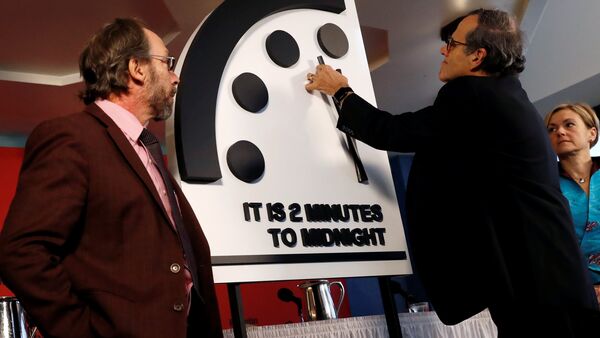 It’s 2 minutes to “humanity’s midnight,” according to the Doomsday Clock, since its minute hand was last moved in January 2018, marking recent changes in the world that threaten humankind.

The Science and Security Board of the Bulletin of the Atomic Scientists moved their Doomsday Clock 30 seconds further on January 25, 2018 and now only 2 minutes remain separating humanity from the End of Days, according to board. Though they do not specify how exactly it will happen, because since 2007 the clock has also been reflecting the development of additional dangerous trends in the world, beyond just nuclear armaments.

How it all began

The Doomsday Clock was invented in reaction to the first use of a nuclear weapon, carried out by the US. Initially, the clock showed how close humanity was towards obliterating itself in a nuclear war, according to the opinion of the board of the Bulletin of the Atomic Scientists.

When it was first installed in 1947, its hands showed 7 minutes to midnight. Two years later, when the USSR tested its own nuclear bomb, the minute arrow was moved to 3 minutes. In 1953, when both superpowers tested their first thermonuclear devices, it came dangerously close to its final mark – 2 minutes to midnight. Since then, the hand of the clock has not been this close to the end until the 25th of January this year.

Evolution of the Doomsday Clock

Ever since 1960, the clock has gone back and forth, reaching its maximum of 17 minutes to midnight in 1991, reacting to the development both in terms of nuclear armaments and the reduction in tensions between the key global players.

This changed, however, in 2007, when the board decided to include climate change into their assessment of the position of the clock. In 2017 the board also included factors such as the threat of cyberwarfare and autonomous machine systems (a.k.a. Artificial Intelligence). According to the board’s opinion, it is no longer possible to limit the field of threats that endanger human kind to nuclear weapons only, as new threats continue to emerge.

Not just a gauge

It is incorrect, though, to think of the Doomsday Clock as a gauge that simply shows the opinion of a small group of experts on how close humanity is to its end. Not only is each change to the clock’s hand motivated by a detailed report on the current state of affairs in the world, issued by the board each time they move the minute arrow; they also give their recommendations as to how the situation can be improved and move the hand further from the midnight mark.

For example, in their 2017 report they recommend that the US and Russia return to the negotiating table to resolve their issues and relieve tensions, as well as to reduce the alert levels of their nuclear weapons. It also called upon all countries in the world to reduce their greenhouse gas emissions, to fulfill the Paris Accord, and create institutions, designed to explore and address potentially malign new technologies.

Among the factors that moved the minute arrow in 2018 are the significant progress that North Korea has made in its nuclear program; the war of words between Trump and Kim Jong-un about whose nuclear button is bigger; and deteriorating relations between the US and Russia.