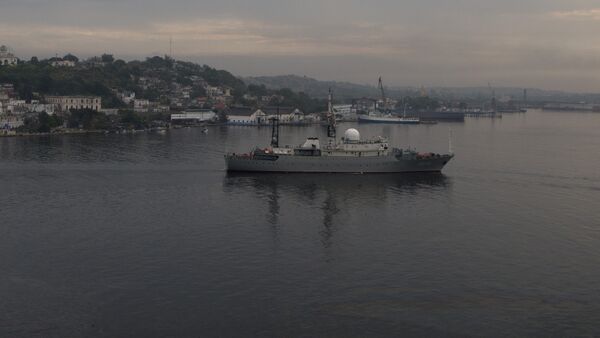 A Russian intelligence ship was reportedly seen performing a routine assignment in the Atlantic. The Russian Defense Ministry has yet to comment on the information.

A few days after departing from Port of Spain in Trinidad and Tobago, a Russian Vishnya-class intelligence vessel called Viktor Leonov has allegedly shown up in international waters about 100 miles southeast of the coast of South Carolina, according to US media reports.

CNN pointed out, however, that Viktor Leonov "routinely performs this mission," as the vessel was seen conducting similar patrols several times over the course of the last few years.

Troubled Waters: US Destroyer Arrives at Ukrainian Port 200 Km Off Crimea
For example, in early 2017 the vessel was detected 130 km from the coast of Delaware, while a year earlier it took part in a joint exercise with the Venezuelan navy.

A US defense official cited by CNN said that the "spy ship" typically cruises along the US East Coast near US naval facilities in Cape Canaveral, King's Bay, Norfolk and New London.

The Russian Defense Ministry has yet to comment on this development.

But while US media outlets appeared eager to report on the movements of a Russian vessel in international waters, the adventures of American naval ships and surveillance planes skirting the territories of other nations receive less coverage.

For example, earlier this month a US Navy Boeing P-8A Poseidon aircraft was spotted flying close to the coast of the Russia’s Crimean Peninsula, while another US reconnaissance plane made a separate flight near the borders of the Russian exclave of Kaliningrad in the Baltic Sea.

An RQ-4A Global Hawk, call sign 12-2050, was also detected in January while conducting a separate recon mission, flying over Ukraine, including the war-torn Donbass region, and along the Crimean coast.

Over the last four years the US and its NATO allies have regularly deployed their warships to the Black Sea, ignoring all suggestions that it might possibly threaten or provoke Moscow.

Also, the official newspaper of the ruling Chinese Communist Party has accused the United States of "wantonly provoking trouble" after last week a US Arleigh Burke-class guided missile destroyer swooped close to the disputed atoll of Scarborough Shoal, which is also known as Huangyan Island in China.