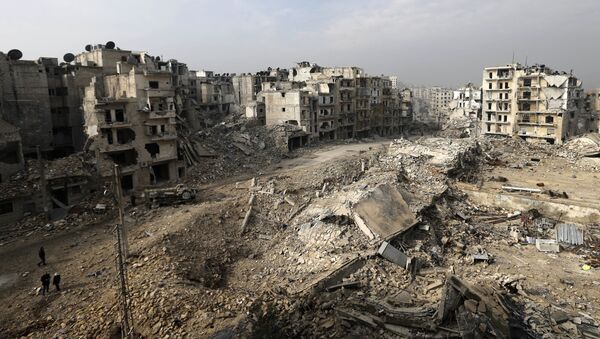 MOSCOW (Sputnik) - The Russian Foreign Ministry sharply criticized on Friday an unofficial US report containing the assessment of Russia's position regarding the use of chemical weapons in Syria.

The report was disseminated by the US delegation at the United Nations on January 9.

"After a thorough study of this document, we have to state that the content of this material has nothing to do with reality and completely distorts our country's approaches to investigating such incidents," the ministry said in a commentary.

World
Trump Urges UN to Back Extension of Mission Probing Syria Chemical Weapons Use
Moscow called on the UN Security Council to give assessment of US attempts to distort facts around chemical weapons use in Syria.

"We once again call on the partners in the UN Security Council to show common sense and objectively assess the essence of US attempts to present a false image of the perpetrators of chemical incidents in Syria," the commentary said.

The ministry also described attempts to shift responsibility for chemical attacks in Syria solely on Damascus as "devoid of any logic" as the Syrian government troops were successfully advancing on militants' positions and had no reason to use chemical weapons against them.

"From the very beginning the Syrian authorities have many times invited experts of the OPCW [Organization for the Prohibition of Chemical Weapons] Fact-Finding Mission in Syria and the OPCW-UN Joint Investigative Mechanism to visit Khan Sheikhoun [subjected to a chemical incident] and the Shairat airbase [allegedly used by Syrian forces for Khan Sheikhoun's attack] in order to carry out an investigation… However, experts from both the OPCW Fact-Finding Mission and the OPCW-UN Joint Investigative Mechanism have not arrived there," the commentary said, adding that it seems that the experts were "unmotivated" to visit the sites.

Syria Ambassador to UN Refutes Accusations of Chemical Weapons Use by Army
The Russian Foreign Ministry refuted allegations that Moscow stated that there was no doubt that chemicals had been delivered to Syria from Libya and Iraq. However, these routes of delivery could really have been used, which must be a subject to further investigation, the ministry noted.

Moscow also reminded that it had provided facts proving that the Khan Sheikhoun chemical incident could have been plotted to damage the image of the Syrian governmental troops but this evidence was not taken into account during the investigation. The Russian Foreign Ministry also pointed out that all members of the OPCW Fact-Finding Mission represented NATO states or their allies, which raises an issue of the team's impartiality.

On October 26, the Joint Investigative Mechanism (JIM) presented its report on the incidents in Syria's Umm Hawsh on September 15-16, 2016 and in Khan Sheikhoun on April 4, 2017. According to the report, the government of Syrian President Bashar Assad is responsible for the use of sarin in the Khan Sheikhoun incident, while the Daesh is responsible for the use of sulfur mustard in Umm Hawsh.

Russia has pointed to the absence of tangible results in the work of the OPCW-UN mission on numerous occasions. The Russian Permanent Mission to the United Nations stated that the JIM's report was based mostly on assumptions and the selective use of facts.