Up to 1 Mln EU Migrants Could Settle in UK After Brexit, Report Warns 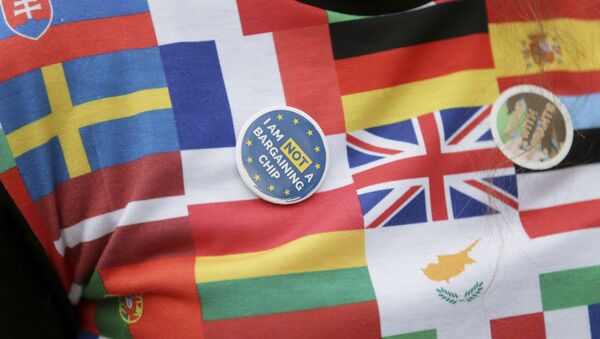 An EU demand that Britain grant permanent settlement status to migrants from the bloc who arrive after Brexit could lead to a major upsurge in the number of EU nationals flowing into the country, a migration watchdog has warned.

According to a report, prepared by Migration Watch UK, the number of EU nationals arriving during the two-year post-Brexit transition period could amount to one million.

Even though not all of the EU nationals coming to Britain would seek permanent residency, the report says that “a larger proportion of them might well stay on if the prize was a right to permanent settlement in the UK,” the Sun wrote.

UK May Deprive New EU Migrants From in-Work Benefits for 4 Years Post-Brexit
Furthermore, these new arrivals could eventually be joined by direct family members, including elderly dependent relatives, future children and partners who were not EU citizens, the report added.

London sees Brussel’s demand as a challenge to its initiative to end permanent settlement rights for EU migrants on March 29, 2019, the day the United Kingdom formally terminates its membership.

“This EU demand is absolutely absurd. We will have left the EU. That must mean that EU citizens who arrive after our departure should no longer enjoy treaty rights that derive from our membership,” Migration Watch UK head Lord Green said.

British Prime Minister Theresa May has proposed delaying a full Brexit until 2021 by asking EU countries to agree to a two-year transition period during which the UK would continue to enjoy full access to the single market.

In exchange, London would be ready to allow EU citizens to live and work in Britain, submit to European laws and continue paying into the EU budget.

READ MORE: EU Migrants Under 30 May Get 2-Year UK Visas After Brexit