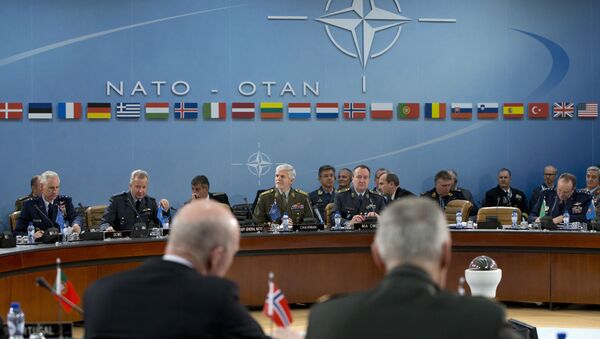 The North Atlantic Treaty Organization (NATO) considers Russia as a "peer competitor" and closely monitors any developments and modernization that Moscow is undertaking, Gen. Petr Pavel said on Wednesday.

"We characterize Russia as a peer competitor. We obviously follow closely all the developments and modernization and taking all the measures that are necessary to be ready for any contingency," Pavel said during the 178th Military Committee in Chiefs of Defense Session.

On Saturday, Chairman of the US Joint Chiefs of Staff Gen. Joseph Dunford said during a NATO meeting in Brussels that Russia had modernized many aspects of its military, and was the greatest threat to Europe and other regions.

Moscow has repeatedly stated that Russia has never planned to attack any NATO member. Russian Foreign Minister Sergey Lavrov has said that NATO recognizes this but uses the pretext of alleged Russian aggression to deploy more equipment and battalions next to Russian borders.

The only way to fully eliminate the threat posed by the Daesh terror group is to ensure the most wide-ranging cooperation possible, which would seek not only to physically destroy Daesh, but to eradicate the roots of its dangerous ideology, NATO’s Military Committee Chairman said.

"It’s a long way before we can say we got rid of this threat … I truly believe that the recipe for success is in the broadest possible cooperation which will be very flexible and will address all elements of this threat — not only physical destruction of ISIL [Daesh], but also the elements from which this ideology grows. This means social issues, economic, religious and others," Pavel said during the 178th Military Committee in Chiefs of Defense Session.

He noted that such challenges went far beyond the capabilities of one organization, such as NATO, and therefore the alliance was seeking to cooperate with other organizations and nations which "have the tools and will to address this threat."

"[This ideology] is dangerous because it goes against the civilization, I would say, regardless of religion. We are all together in fighting this ideology," Pavel stressed.

'Complex Challenges': Will Pakistan Become New Daesh Hotspot?
In 2017, Daesh lost big chunks of the territories it had previously captured in Iraq and Syria, such as the Iraqi city of Mosul and the Syrian city of Raqqa – the terrorists’ major strongholds in the respective countries. As the terrorist group is facing military defeats in the Middle East, its ideology still continues to spread not only in the region, but in Europe, where people inspired by the group's radical beliefs have carried out a number of terrorist attacks in recent years.

NATO is now considering options for increasing training assistance and capability development to Iraq based on specific requirements both from the Iraqi side and from the US-led anti-terror coalition, Gen. Petr Pavel said.

"NATO is now considering options for increasing that assistance, and it will come on the table of defense ministers next month. We are considering the situation, the options, and we are generally ready to provide more assistance based on specific requirement from the coalition and from Iraqi government, and it will be focused on training assistance and capability development," Pavel said at the press conference, answering the relevant question.

With the defeat of the Daesh terrorist group, the situation in Iraq is changing, the official noted.

"We can say that physically ISIS [Daesh] has been defeated, but that does not mean that the ideology was defeated, and that Iraq now is safe and secure country. We have to continue, and there is general understanding that Iraq will need assistance," Pavel explained.

There is also interest from the Iraqi side in the coalition's and NATO's assistance, he added.

NATO has held a number of training missions in Iraq since early 2000s to increase the professionalism of the Iraqi forces.

The US-led coalition of more than 70 nations is conducting military operations against Daesh in Syria and Iraq. The coalition's strikes in Iraq are conducted in cooperation with Iraqi authorities. In December, Iraqi Prime Minister Haider Abadi declared the end of the country's fight against the Daesh after Iraqi troops had re-established complete control over the border with Syria.