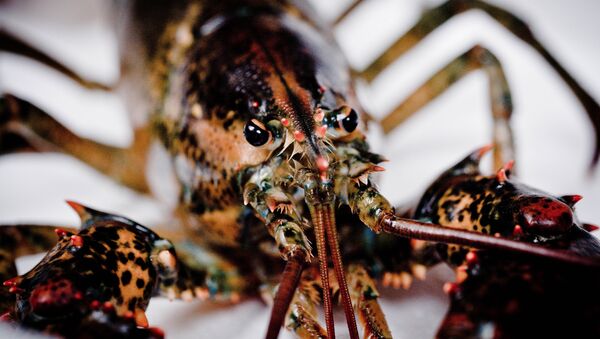 In response to studies suggesting that lobsters can feel pain, it was announced Tuesday that Switzerland is banning the age-old culinary tactic of cooking the crustaceans by boiling them alive.

The legislation, which takes effect March 1, mandates that doomed lobsters will need to be knocked out or instantly killed before being tossed into the bubbling waters.

"The practice of plunging live lobsters into boiling water, which is common in restaurants, is no longer permitted," the law states, according to Metro UK. "[From March 1] lobsters will now have to be stunned before they are put to death."

Some humane options to turn off the lobster's lights include using devices such as the Crustastun, which stuns and kills the lobster, and cutting the chain of nerves running down the middle of the lobster with a sharp knife, according to reports.

That's not the only protection that lobsters have been granted.

Viral
Join the Global Club: Switzerland Gets Its Own Anti-Trump Demonstration

"Live crustaceans, including the lobster, may no longer be transported on ice or in ice water," the law states, adding that they must be transported in saltwater. "Aquatic species must always be kept in their natural environment."

Though the move is new to Switzerland, across the Alps, the Italian town of Reggio Emilia adopted similar legislation in 2004. At the time, the Telegraph reported that officials in Italy labeled the boiling of lobsters as "torture." Boiling lobsters is also banned in New Zealand.

Although the change may be causing a few headaches among chefs in the country, researchers, including PETA UK, have hailed the move as a step in the right direction.

"It's a positive move, the Swiss are looking at a potential problem and trying to deal with it," Robert Elwood, a professor of animal behavior at the Queen's University Belfast, told CNN. "We give protections to birds and animals, currently we give very little protection to decapod crustaceans — lobsters and crabs — and the question comes, why is there a difference?"

Researchers, including Elwood, have long argued that due to the marine animals' advanced nervous systems, they too can feel pain.

Switzerland's law, which is part of an overall animal protection reform, will also strengthen protections for dogs by cracking down on illegal puppy farms, Swiss Info reported.