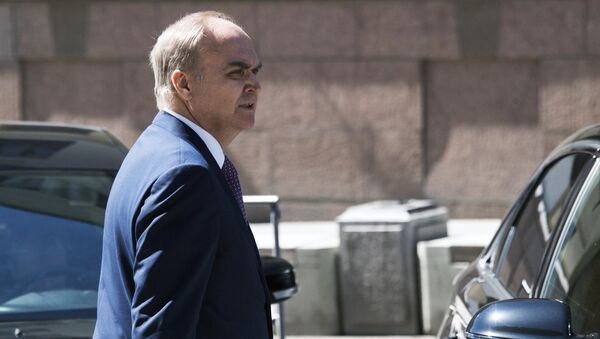 WASHINGTON (Sputnik) - The Russian ambassador to the United States, Anatoly Antonov, said he had raised the issue of renewing Moscow-Washington contacts at various levels, including in the "2+2" format - between defense and foreign ministers - during a meeting in Washington with US Ambassador to Russia Jon Huntsman.

Antonov and Huntsman met on Thursday in Washington. According to the US Department of State, Huntsman was in the US capital for regular consultations.

"At the meeting with Hunstman, I raised the issue of the resumption of contacts between our countries at various levels, including meetings of defense ministers, and in the '2+2' format. We proposed [earlier] to create a group on cybersecurity, offered to restore contacts between parliamentarians — this is very important," Antonov told Russian reporters.

READ MORE: US May Stay Unprepared for 2018 Elections Over Queue for Cybersecurity Screening

Russian President Vladimir Putin and US President Donald Trump held their first meeting on the sidelines of the G20 summit in Hamburg in July 2017. The Russian president said following the meeting there should be no uncertainty in ties between Washington and Moscow when it comes to cybersecurity, adding that a working group would be created to address the issue.