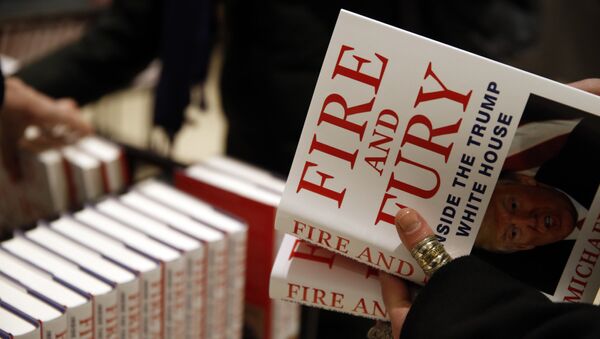 © AP Photo / Alastair Grant
Subscribe
On Friday, Randall Hansen was in Washington, DC, for a conference when he heard people talking about Michael Wolff's new tell-all book, "Fire and Fury: Inside the Trump White House."

The chatter caught the University of Toronto professor's attention since he, too, had written a book with the "Fire and Fury" title.

"I was hearing ‘Fire and Fury' all over the place and I perked up every time I heard someone use that title," Hansen told the Canadian Press.

But the two books were nothing alike. Wolff offered readers a scoop on what insiders in the US administration think about US President Donald Trump and his ability to manage the Land of the Free, while Hansen's book, titled "Fire and Fury: The Allied Bombing of Germany, 1942-1945," focused on the effects of carpet bombing in Germany.

Though Hansen "had a chuckle" about the similar titles with fellow conference attendees, he later told the Washington Post that he'd "thought nothing of it."

However, later that night he was hit with a surprise. After looking up his book on Amazon, Hansen discovered that the sales of his 2009 book had shot up and that it had even shown up on three different bestseller lists on the site.

In response to the news, he took to Twitter.

​"Incredibly, sales of my [book] have increased," Hansen wrote. "Will I owe a larger royalty cheque to Bannon & Trump? If so, the irony will know no limits."

Turns out a slew of readers, of which only a few complained about the confusion, mistook his "Fire and Fury" for Wolff's newly released book.

"It's not my fault people can't tell the difference between a book about Trump and a book about the bombing of Germany," Hansen told the Canadian Press. "But most have been jovial and appreciated the moment of levity."

In the end, the sales aren't important to Hansen, he said.

"What would be gratifying to me is that if at this moment where we have an unstable, deranged demagogue operating the greatest army the world has ever seen, that more people read a book about the horrors of war and the terrible effect on the civilian populations," Hansen said. "Also, I don't want to sound overly altruistic — there's no such thing as bad publicity."

Hansen later told the Post that he intends to reach out to Wolff at some point in the future.