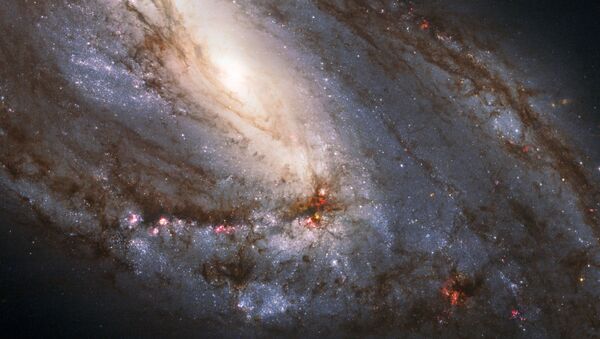 Sergei Trushkin, an astronomer from the Special Astrophysical Observatory of the Russian Academy of Sciences, has explained why scientists are eager to discover the mystery of the fast radio burst phenomenon and how Russia’s RATAN-600 radio telescope could help them.

The first fast radio burst (FRB) was identified in 2007 in data recorded by the Parkes Observatory in Australia. An FRB is a high-energy astrophysical phenomenon of a radio pulse lasting only for a few milliseconds.

"Taking into account our modest capabilities, we expected to identify a maximum of three to five such pulses during a year of observation. On the other hand, even if we manage to discover at least one event on the frequencies which are used to study the phenomenon, our understanding of these signals will radically change," Trushkin said at the annual conference "High Energy Astrophysics" in Moscow.

According to the scientist, the first radio telescopes which were developed 50 years ago could not identify FRBs.

"They were discovered by the Parkes Observatory after its detectors were upgraded, so scientists could see they were dealing with signals form a faraway galaxy, not with terrestrial radio frequency noise," Trushkin said.

A Signal of Artificial Origin?

Many FRBs have been discovered since 2007, but the origin of the phenomenon remains unknown. There have been speculations that the phenomenon may be of  artificial origin, for example be a call from an extra-terrestrial civilization, due to its strange intermittence.

A suggestion was offered that one of the discovered FRB could have emanated from an elliptic galaxy at a distance of six billion light years from the Milky Way. Scientists assumed that FRBs are produced as the result of a neutron star merging or other compact objects transforming into a black hole.

This assumption, however, was debunked in March 2016. Canadian researchers, who also worked at the Parkes Observatory, discovered one of the first  signals (FRB 121102) in the same location of space where it was first detected six years ago.

According to Trushkin, this discovery has rebuffed the majority of theories which attributed the emission of FRB signals to cosmic events which happen only once, including the birth and merging of black stars, pulsars or other objects.

In an attempt to explain the very unusual properties of an FRB, there have been suggestions that they may emanate from a decaying axion, a hypothetical elementary particle and a possible component of dark matter, from cosmic strings or microscopic black holes.

Last summer, Russia joined in the exploration of the FRB phenomenon with its famous RATAN-600 radio telescope. Trushkin and his colleagues believe that the telescope will help shed light on the origin of FRBs.

"There are so many theories now seeking to explain the nature of this phenomenon. As researchers and experimentalists, we want to discover new facts and obtain new information which our fellow theorists could use to develop their theories," the Russian scientist said.

According to Trushkin, the key features of a FRB – extremely high brightness and extremely short length – will not be a problem for the Russian telescope, which is unable to observe the same location for a long time. The RATAN-600 will scan the night sky, observing each of its segments for a short period, which allows it to cover a large portion of the sky. 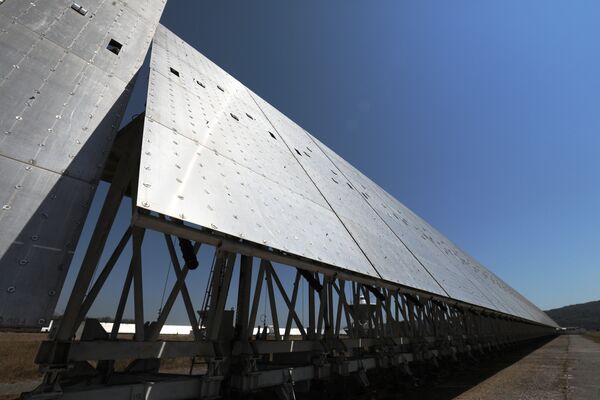 A flat reflector of the RATAN-600 radio-telescope at the Special Astrophysical Observatory, Russian Academy of Sciences
© Sputnik / Maria Plotnikova
/
Go to the photo bank

He said that Russian scientists will focus on the same space location where FRB 121102 was detected. Trushkin believes that the repeating nature of the signal will increase the chances of detecting at least one FRB and study the signal on frequencies unavailable to other radio telescopes.

For its upcoming mission, the telescope has already been upgraded with new detectors and tested. According to Trushkin, in August 2017, Russian scientists caught a signal coming from the same location as that of FRB 121102. At the time, the same signal was also identified by the Green Bank Telescope in the United States and the Westerbork Radio Telescope in the Netherlands.

"Preliminary data shows that FRB 121102 is not just an alternating and repeating source. It can emit such pulses by portions. For example, it can generate several signals in a month and then remain silent for a week, a month or a thousand days," Trushkin said.