Shah Shah a Go Go: Could the Pahlavi Dynasty Really be Restored in Iran? 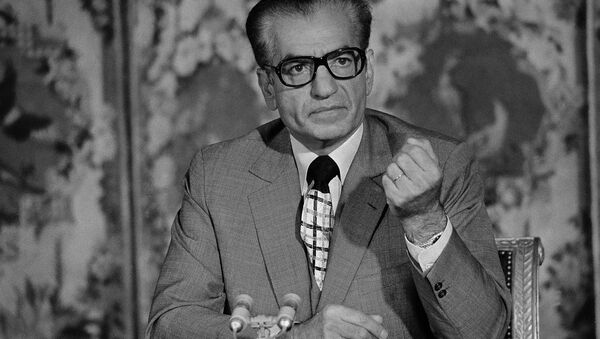 Demonstrations have been taking place in Iran against unemployment, poverty and corruption. Some of the protesters have even been calling for the return of Reza Pahlavi, son of the late Shah. Sputnik analyzed the likelihood of the monarchy being restored.

The majority of Iranians were not alive when the last Shah of Iran fled into exile in Egypt in January 1979 and was replaced a few weeks later by Ayatollah Ruhollah Khomeini and the new Islamic Republic.

During this week's demonstrations some young people have started chanting for the restoration of the monarchy, the Pahlavi dynasty.

The protesters know nothing of the SAVAK, the Shah's secret police, who often tortured people who opposed the absolute monarchy, which ruled on behalf of a ruling elite and their political allies and business friends in the United States and western Europe.

The last Shah, Mohammad Reza Pahlavi, died of cancer in 1980 and his 57-year-old son, Reza, now lives in Maryland in the United States.

The failure of theocratic tyranny in #Iran:

— The second highest rate of executions in the world

​Reza, who has been tweeting in support of the demonstrations in Iran, has in the past denied receiving funding from the US government and claimed allegations he was supported by the CIA were "absolutely and unequivocally false".

Day 5. I just had a chat with a retired worker in Iran who spent a few years in prison in the Shah's time and was very active in the revolution against the Shah in 1979. His son is now a monarchist hoping the Shah's son can rule Iran and the son protests every day! Strange times.

Lisa Daftari, an Iranian-American Middle East commentator and editor in chief of The Foreign Desk, said two-thirds of Iran's population of 81 million had been born since the Islamic Revolution of 1979 but she said she still found it "surprising" they were invoking the name of the Shah.

"But there is a nostalgia that underlines this movement. There is a desire to turn the clock back to a secular non-Islamic Iran when people could just be Iranian," Ms. Daftari told Sputnik.She said there had been protests in cities as diverse as Mashhad, Esfahan and Qom.

"This is not just a Tehran millennial movement," she told Sputnik.

In October last year the Iranian authorities banned an "illegal gathering" at the tomb of the ancient Persian king Cyrus the Great and arrested several people.

The Ministry of Intelligence said those organizing it were "a counter-revolutionary group which had wanted to organize an illegal gathering under the pretext of celebrating Cyrus."

Cyrus the Great was the founder of the Achaemenid Empire in the 6th century BC and ruled over ancient Persia for about 30 years, capturing Babylon in the process.

Crowds gathered in the religious city of #Qom chant "Oh Shah of Iran, return to Iran!" Calling upon Reza Pahlavi, the son of the late Shah, to return. He currently lives in Maryland. #IranProtests https://t.co/uqmZB5Wvkg

The Pahlavi dynasty claimed to be descended from Cyrus and the other great Persian kings, who once ruled a mighty empire stretching across the Middle East.

But by the 20th century Persia — which was renamed Iran in 1935 — was a weak state which was prone to intimidation by the British Empire and later by the United States, both of which were aware of the growing importance of its oil industry.

In January 1979, after a year of protests and demonstrations, the Shah finally agreed to leave and after the Islamic Revolution thousands of middle and upper class Iranians went into exile rather than live in a country which had a hardline Shia Muslim ethos.

In recent events, enemies of #Iran have allied & used the various means they possess, including money, weapons, politics &intelligence services, to trouble the Islamic Republic. The enemy is always looking for an opportunity & any crevice to infiltrate &strike the Iranian nation. pic.twitter.com/HIXtudRAue

When Iraq invaded Iran in 1980 many royalists hoped Saddam Hussein would emerge victorious and the new Islamic Republic would collapse, allowing for the return of the Shah and his acolytes.

But Iran survived — despite losing around 500,000 soldiers on the battlefield — and the Islamic Republic went from strength to strength as the price of oil rose.

In the 1970s the Iranian Shah ordered and payed for 1,750 Chieftain tanks from the UK but the purchase was canceled after the Shah was toppled.

Only 185 tanks were delivered and Britain owed 450 million ($527 million) to Ayatollah Khomeini's government.

Probably the most important thing for #IranianProtests is to never believe American or British politicians when they say Iran needs to be a democracy b/c what they mean by freedom is your return to their spheres of influence like under the Shah when protesters were also shot.

They never paid it but in November last year it appeared the debt would be paid as part of the negotiations to secure the release of Nazanin Zaghari-Ratcliffe, an Iranian-British woman, who was sentenced to five years in Iran over alleged espionage and plotting to oust the clerical establishment.

The Obama administration had also agreed to pay back $1.7 billion to Iran from another failed arms deal during the time of the Shah as part of the nuclear deal with Tehran, which Donald Trump is threatening to unpick.

The Shah of Iran had the money in the U.S. This was litigated in the World Court. The money was declared to belong to Iran. U.S. was ordered to return it. Obama negotiated a smaller amount. Also, he delayed payment to insure that some Americans were freed.

​The falling price of oil has contributed to the worsening economic situation in Iran and it is issues like the price of bread and petrol which appears to have fueled the recent demonstrations, which began in the country's second biggest city, Mashhad.

​The views and opinions expressed in this article are solely those of the author and do not necessarily reflect those of Sputnik.