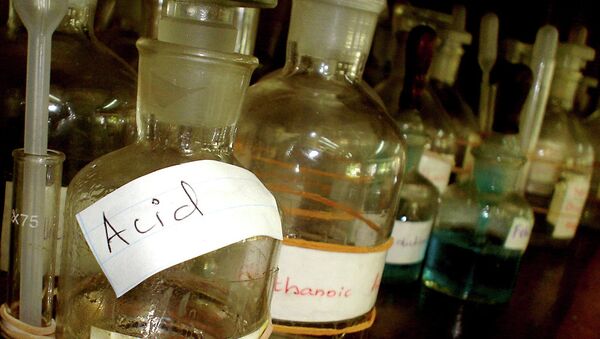 © Flickr / Hash Milhan
Subscribe
An acid attacker jailed for 20 years after throwing a corrosive substance over a crowd in a packed London nightclub has appeared in court again and admitted another offense.

Arthur Collins, 25, hid a cellphone, two sim cards and two USB sticks inside a crutch while being held on remand at Thameside prison in south-east London in September.

He was being held there ahead of his trial over the acid attack incident in April at the club, Mangle E8, in Dalston, east London, in which 16 people suffered chemical burns, including two sisters from Australia, while three others were left temporarily blinded.

Collins, the former boyfriend of British reality TV star Ferne McCann, had been using the crutch after injuring his feet trying to evade police while on the run after the attack.

​He appeared via video link at Bromley magistrates court in London on December 27 and admitted one charge of possession of a prohibited item while in prison.

The court heard he wanted to use the phone to make private calls to his then girlfriend who was pregnant with their child at the time. Collins is serving his jail sentence at the maximum security Belmarsh prison, also in south-east London, having been sentenced last week.

He spoke only to confirm his identity. The banned items were discovered by a prison officer after he removed the rubber stopper from the bottom of the crutch during a cell search. The court heard evidence was later found on the phone of calls and messages made to family and friends.

Acid attacker Arthur Collins gets 25 years and claims he has no money to pay compensation. Judge says it seems "unlikely" his two Harley Street hair transplants were done on NHS. Also emerges AC was leasing a Mercedes Jeep despite being disqualified and owing £7k on credit cards

​Audrey Morgan, Collins' lawyer,  said he obtained the phone so he could make private calls to Miss. McCann.

While he knew there was a phone in the cell, he feared the calls would be recorded and information passed to the media.

"He did not have the phone for any sinister purpose. His partner at the time was heavily pregnant and gave birth the following November. He had this phone because he and his partner had been hounded by the media," said Ms. Morgan.

She added that his acid attack trial and subsequent imprisonment had been a "difficult and trying time for him".

"The items… were found inside a crutch that was being used by Collins on September 10," said Prosecutor Samantha Mitchell.

"Security officers were in the process of searching the cell occupied solely by Collins. He had been using the crutch because of an ankle injury. An officer removed a bottom rubber stopper and discovered the items. They contains evidence of messages and calls between Collins and his family," she added.

Arthur Collins defence barrister pulls out thick folder containing social media posts including pics of acid attack victims in swimsuits. Team trawled through accounts after the attack to find evidence they have 'to some extent returned to some normality'

​He told his trial at Wood Green Crown Court he did not know the bottle contained acid, believing it to contain a liquid date rape drug, which he had snatched from two men after overhearing them planning to spike a girl's drink.

'No go Areas' in London

Trial Judge Noel Lucas ordered that, as well as his prison term, Collins, originally of Broxbourne, Hertfordshire, will additionally be subject to five further years on extended licence.

Some parts of London are now becoming "no go areas" after it was revealed Britain has the highest rate of acid attacks per capita than anywhere else in the world.

Moped delivery drivers are refusing to visit some parts of the capital city for fears over their safety and the risk of having acid thrown over them.