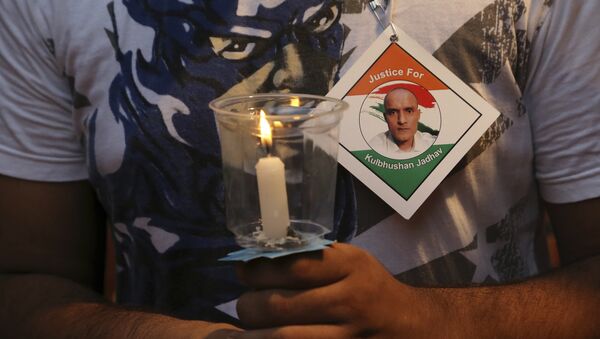 Fresh tensions are brewing between India and Pakistan over the latter’s treatment of the family members of an Indian prisoner on death row. India has alleged that Pakistan disregarded the sentiments of the wife and mother of Kulbhushan Jadhav who were allowed to meet him in Islamabad after eight months of diplomatic efforts.

New Delhi (Sputnik) — Kulbhushan Jadhav, an Indian Navy official arrested and convicted by Pakistan’s military court for espionage in the troubled Balochistan region, was allowed to meet with his mother and wife from behind a glass wall at Pakistan’s foreign office in Islamabad on Monday. But the supposed gesture of goodwill left a bitter taste behind with India alleging that Jadhav’s family members were subjected to harassment and that the meeting was held in a largely coercive environment.

Upon their return to India, Jadhav’s wife and mother reportedly narrated their experience to the Minister of External Affairs (MEA) Sushma Swaraj. A few hours after the meeting, Swaraj’s ministry issued a reproachful statement accusing Pakistan of flouting an agreement that was earlier reached, as well as disregarding the cultural and religious sensibilities of the visiting Indian citizens.

Jadhav’s wife, Chetna, was asked to remove all her accessories including the sacred thread worn around the neck and the red pigment on the forehead usually worn by married Hindu women. She was also asked to change her clothes and remove her shoes that were “unwarranted for security,” according to the MEA’s statement.

India has also alleged that contrary to the agreement, the local press was allowed to hector the two women. Also, Jadhav’s mother who could speak only her mother tongue – Marathi – was repeatedly interrupted and was asked to speak in English.

“Prior to the meeting, the two Governments were in touch through diplomatic channels to work out its modalities and format. There were clear understandings between the two sides and the Indian side scrupulously abided by all its commitments. However, we note with regret that the Pakistani side conducted the meeting in a manner which violated the letter and spirit of our understandings,” Ministry of External Affairs Spokesperson Raveesh Kumar said.

What baffled the Indian establishment was that Kulbhushan Jadhav’s wife’s shoes were not returned to her after the meeting.

“For some inexplicable reason, despite her repeated requests, the shoes of the wife of Kulbhushan Jadhav were not returned to her after the meeting. We would caution against any mischievous intent in this regard,” MEA Spokesperson said.

India has also raised concerns about the safety of Kulbhushan Jadhav in Pakistani custody.

“From the feedback we have received of the meeting, it appears that Kulbhushan Jadhav was under considerable stress and speaking in an atmosphere of coercion. Most of his remarks were clearly tutored and designed to perpetuate the false narrative of his alleged activities in Pakistan.

His appearance also raises questions of his health and well being,” the statement further read.

Part of Kulbhushan Jadhav's earlobe missing, dark bruises covered by makeup clearly visible on his shaven head, a dramatic amount of weight lost, made to speak (in a scripted fashion) to family in English instead of mother tongue.

If this doesn't boil your blood, nothing will. pic.twitter.com/DBhBd0uQ4j

India’s has appealed to the International Court of Justice against the death sentence issued by the Pakistani military court, which has given Jadhav reprieve till the final decision.