Syrian Opposition to Present Lists of Prisoners - Head of Delegation 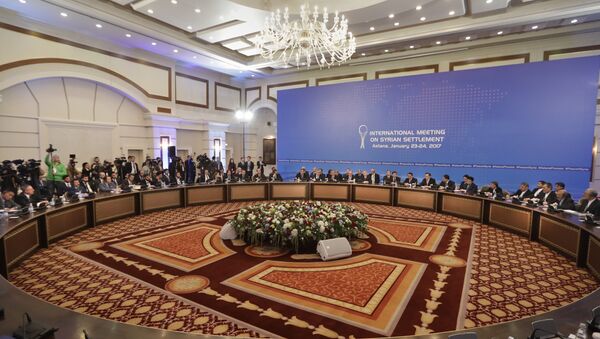 After the end of the eighth round of the Astana reconciliation talks, the head of the Russian delegation, Alexander Lavrentyev, said that within next several weeks a working group of the ceasefire guarantor states — Russia, Iran, and Turkey — on prisoners exchange will start to work. He added that the work would require some time as parties to the Syrian conflict have concerns with exchanging lists of prisoners.

"We were asked [to provide the lists] and we are now making efforts to submit the lists with data on all the prisoners, and places of their detention," Toma said.

Russian, Kazakh Presidents Discuss Syria Reconciliation, Astana Talks - Kremlin
He welcomed the creation of the working group on prisoners exchange adding that the Syrian government had informed the opposition about its intention to provide a list of prisoners.

"That is not an awkward situation for us, yesterday we said during the meeting with UN representatives that in principle we had no objections to the arrival of [members of the] International Committee of the Red Cross in order to check our prisons. They will see a humane treatment," Toma said.

He added that the results of the work on prisoners exchange may influence the opposition's decision whether it will take part in the National Dialogue Congress in the Russian city of Sochi.

Following the end of the eighth round of peace talks on Syria, that was held on December 21-22 in Astana, the guarantor states announced the Syrian National Dialogue Congress in Sochi scheduled for January 29-30. A special preparatory meeting will be held on January 19-20.

Russia has put forward an initiative to convene the Syrian National Dialogue Congress in the Black Sea resort of Sochi. Moscow has stressed many times that the Congress along with the intra-Syrian talks in Geneva, is aimed at facilitating the peace process, but is not an alternative for it.