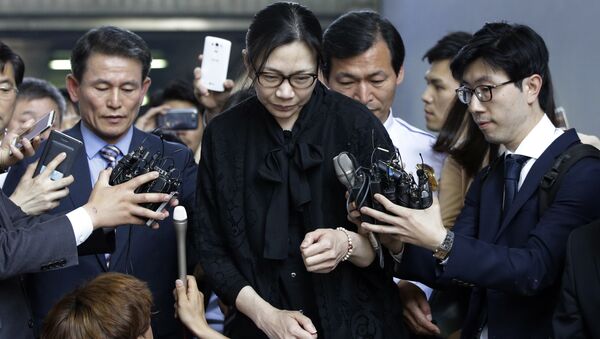 © AP Photo / Lee Jin-man, FIle
Subscribe
Cho Hyun-ah, the former vice president of Korean Air and a daughter of the company’s chairman, has avoided jail for the embarrassing 2014 tantrum during which she attacked a flight attendant for serving her nuts in a bag instead of a bowl, after the Supreme Court upheld the previous suspension of her sentence.

Cho, also known as Heather Cho, was sentenced by Seoul Western District Court to one year in prison in 2015, but the Seoul High Court later shortened that sentence to 10 months and suspended it, saying the executive did not violate aviation security law.

Having already served five months in prison, Cho was released immediately. The Supreme Court upheld the previous court's decision, saying its ruling is final and cannot be appealed.

Korean Air Allows Active Use of Force, Tasers Against In-Flight Violence
In 2014, Cho gained worldwide notoriety after she ran amok over being served macadamia nuts in their original plastic packaging, as dictated by the company's procedures. Cho decided that she, as a first class passenger, should be served the nuts in a wooden bowl, and immediately started shouting at flight attendant Kim Do-hee.

​According to the South Korean Supreme Court, Cho "yelled several times" to crew members, ordering them to tell the plane's captain to "stop the flight immediately." An earlier BBC report says chief steward Park Chang-jin claimed that Cho made him kneel before her and beg for forgiveness before she hit him several times with a document folder — an allegation that Cho denied.

However, Cho admitted using violence against one flight attendant by pushing her shoulder and throwing an object at her.

Cho also ordered the the chief to drive the still-grounded plane to the John F. Kennedy International Airport gate and leave the plane. The cabin crew had to comply, which created a flight delay of 20 minutes for 250 passengers who were also on the plane.

Park went public with the story, disclosing it directly to the press and filing an official complaint with the Seoul Western District Court. The investigation ended with Seoul Western District Court sentencing Cho to one year in jail, but later the Seoul High Court threw out the charge of hampering an air route — the most serious one — because the aircraft was still on the ground.

The scandal was followed by a civil suit filed in the Supreme Court of the State of New York by the flight attendant who claimed Cho attacked her both verbally and physically. Kim's case was dismissed by the court, saying that "all parties (concerned), evidence, and witnesses" were in South Korea.

Cho issued a public apology for her misdoings and personally visited the houses of the victims, but could not give her apologies in person as they were not at home at the time.