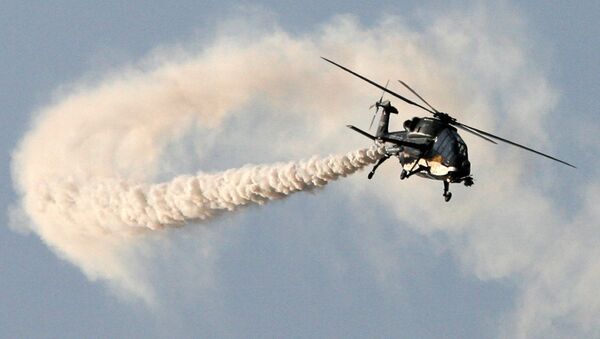 5.5-ton light combat helicopters will provide crucial air support to the armed forces deployed along the border with China as they have the power to carry out operational roles under extreme weather conditions at altitudes of up to 20000 meter in the difficult Himalayan terrain.

New Delhi (Sputnik) — The Indian government has ordered fifteen locally developed Light Combat Helicopters (LCH) for fulfilling urgent requirements of the Indian Air Force and the Indian Army. These will be manufactured at the Bengaluru facility of Hindustan Aeronautical Limited (HAL) which was inaugurated by the Indian Prime Minister Narendra Modi earlier this year.

India Aims to Export Its Home Grown Multi-Role Helicopter to 40 Countries
The selling point of the twin-engine LCH is that they are not only lighter compared to the American AH-64E Apache attack helicopters but also come at half the price i.e. $35 million per unit.

"HAL has received a Request for Proposal (RFP) for 15 Limited Series LCH from the Indian Air Force (IAF) and the Indian Army today. This comes close on the heels of HAL receiving RFP for the supply of 83 LCAs (Light Combat Aircraft) just days ago," HAL said in a statement.

The current version of the helicopters lack sophisticated fire control radar like that of the Apache but HAL has promised to locally develop such radars at a later stage.

Presently, four technology demonstrators are flight testing the LCH following which the flight's air-to-air missile testing capability would be ascertained.

The LCH has the distinction of being the first attack helicopter to land in the forward bases at Siachen, 5400 meters above sea level.