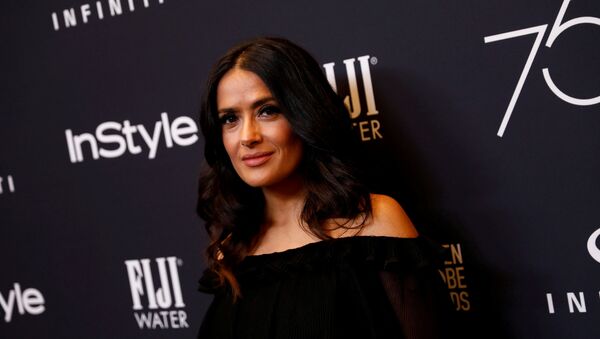 Six Californian actresses have recently filed lawsuits against embattled Hollywood producer Harvey Weinstein. They claim that his alleged attempts to conceal sexual assaults are tantamount to racketeering. It seems that the saga shows no sign of stopping.

In her piece, published by the New York Times, Oscar-winning actress Salma Hayek has accused US film producer Harvey Weinstein of sexual harassment, claiming that he even threatened to kill her.

According to Hayek, her every refusal was met with "Harvey's Machiavellian rage."

"The range of his persuasion tactics went from sweet-talking me to that one time when, in an attack of fury, he said the terrifying words: 'I will kill you, don't think I can't," the Mexican-born actress wrote. 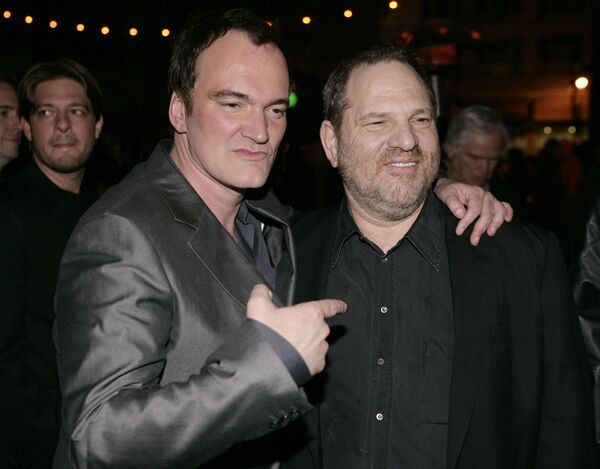 Director Quentin Tarantino, left, and Harvey Weinstein pose together at the after party for the premiere of "Grindhouse" in Los Angeles, on Monday, March 26, 2007
© AP Photo / Matt Sayles

She specifically referred to the shooting of the Oscar-nominated film "Frida," during which, she wrote, "for the first and last time in my career, I had a nervous breakdown" after Weinstein tried to pressure her to do a sex scene with another woman in the film.

Describing Weinstein as a "monster", she claimed that she "never showed Harvey how terrified I was of him."

Weinstein spokesman Holly Baird issued a statement on his behalf, in which he vehemently denied Hayek's accusations.

"All of the sexual allegations as portrayed by Salma are not accurate and others who witnessed the events have a different account of what transpired," according to the statement.

A little bit to late Salma Hayek, why know?, why wait so long?, it just suspicious, horrendous the things that Weinstein did to you, a tragedy, buy I still don’t understand the timing. #WednesdayWisdom #follo4follo #follow #folloback #FolloForFolloBack #follobackinstantly #RT

Twitter users have, meanwhile, reacted angrily to Hayek's accusations with one of them, demanding that Weinstein should be put behind bars.

Based on Salma Hayek’s magnificent and beautifully written NY Times piece, it is even more obvious that Harvey Weinstein is a monster who should spend the rest of his life in prison.

Another user strongly supported Hayek writing an article for the New York Times in which she pointed the finger at Weinstein.

Weinstein, when he thought the media had safely shifted their attention from him to the others.

Then Salma Hayek comes out with an op-ed.

Many others also have given the actress kudos for having the courage to speak out against Weinstein.

The obstacles Salma Hayek had to overcome for that swine Harvey Weinstein to just get her work done!! Unbelievable!

Scores of women, including Gwyneth Paltrow, Angelina Jolie and Lena Headey, have come forward with allegations that Weinstein sexually assaulted them since early October, when the New York Times claimed that Weinstein had allegedly paid off women who had accused him of sexual assault since the 1980s.

While Salma Hayek has been less than on point with certain things, I can only imagine what it could be like for one of the few Latina actresses to break-thru during that time having to deal with Weinstein.