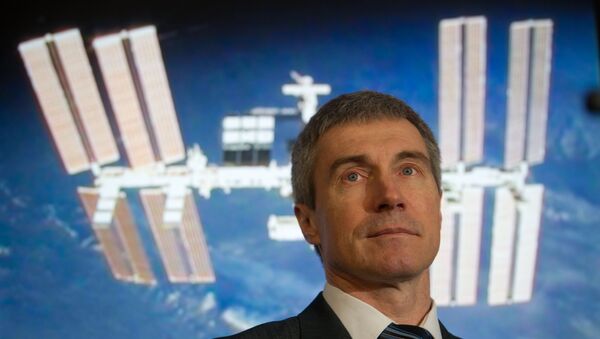 © Sputnik / Grigoriy Sisoev
/
Go to the photo bank
Subscribe
To commemorate the sixtieth anniversary of the first ever human-made object in space - the Russian Sputnik satellite - we spoke with record breaking Russian cosmonaut Sergei Krikalev about the evolution of space exploration and the US-Russia rivalry.

Sputnik: Sixty years ago Sputnik was launched and it was the start of a new era of space exploration. Sixty years on, is there an interest in Sputnik at all or is it just a reminder of a past glory?

Sergei Krikalev: This is a very philosophical question, because if we don't remember then it means we probably wouldn't move forward. Not only for Sputnik. It's also about our history, our achievements, our heroes from previous generations and if we wouldn't remember them, then we wouldn't be the humankind that we are.

Sputnik: Since the launch of Sputnik, the competition in space exploration between the United States and Russia started. How do you see this evolving currently due to the tense political situation, is co-operation in space still possible?

Sergei Krikalev: It's still happening because we still fly into space together and we know that on a political level, on a high level discussions are going on. We are doing many things on which we rely on each other. Literally, the life of one astronaut depends on the other, so we continue our cooperation which is minimally affected by this political turbulence and I hope the example we have set in space could be taken for other activities.

Sputnik: It looks like in around two years the Americans will stop using Russian rockets to go into space. Hopefully they will develop their new spaceship. Will this be a blow towards cooperation between Russia and the United States?

Sergei Krikalev: No I think not, because in the initial phase, we had two transportation system shuttles and now we have much more opportunity to deliver cargo. We have European, Japanese spacecraft that deliver cargo. If we have more than one transportation system, it will only increase reliability so we essentially duplicate our capabilities and it doesn't mean that we stop cooperating.

Sputnik: Is space exploration going to be a truly international endeavor?

Sergei Krikalev: The belief that it has only been between the US and Russia is not true. We have a European space agency and even for space stations, some elements of guidance and navigation on the Russian station is built in Europe.

All of us are using the results of this calculation to point the station or scientific equipment in the direction we need it. We've calculated with Japan for many many years and actually we are creating protein crystals. Now our cooperation is much more international.

It's not as well known but even for European ATV space craft, it was built in cooperation between European countries, the European Space agency and Russia and this cooperation was very fruitful.

Sputnik: Is the launch of Sputnik still inspiring people to go into you profession?

Sergei Krikalev: I think not only Sputnik because at that time it was only one object that was flying in space and many people still remember observing this small star, moving across other stars and how they were trying to listen to the signal from this satellite.

Many people were very impressed because it was the first and only one. Now we have many more opportunities to inspire a young generation. You can develop and conduct space experiments, you can participate in system design for space stations and you can even see glimpses of the life of a cosmonaut.

Of course when you study history you understand that it was the beginning but now we have much more opportunity to inspire the young generation.

Now I think that one of the most inspiring directions is human space flight, how people are operating in space and how people are studying into how to fly into space.