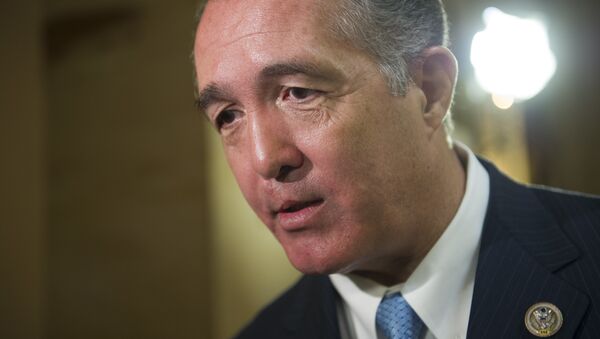 © AP Photo / Cliff Ownen
Subscribe
Republican Rep. Trent Franks from Arizona announced Thursday that he will be resigning over allegations of inappropriate behavior. According to a statement by the congressman, Franks came under investigation by the US House of Representatives' Ethics Committee for asking two former staffers about becoming a surrogate for his child.

The announcement came after Roll Call first reported that the lawmaker was expected to address allegations of "inappropriate behavior," though reports initially did not indicate details."

"I deeply regret that my discussion of this option and process in the workplace caused distress," the statement reads. "It is with the greatest sadness, that for the sake of the causes I deeply love, I must now step back from the battle I have spent over three decades fighting."

"I hope my resignation will remain distinct from the great gains we have made," it added.

Senator Al Franken Resigns Amid Sexual Harassment Allegations (VIDEO)
Responding to the revelation about Franks, Ohio's Rep. Steve Stivers told reporters that the official "did the right thing in stepping aside," adding, "This is a safe Republican seat, and we have no doubt it will stay in our column."

The 60-year-old politician, first elected in 2002, is a member of the Freedom Caucus and is known as one of the most outspoken opponents of abortion in Congress, Politico reported.

"There's been rumors swirling around him for years, at least in 2012," a Republican official first told the Roll Call. "And if this turns out to be true, there won't be that many people who are surprised."

Shortly after news of Franks' coming resignation broke, the House Ethics Committee announced that it was investigating whether Franks had engaged in sexual harassment.

Franks' announcement comes only hours after Minnesota Sen. Al Franken stated that that he would be resigning "in the coming weeks" after several women alleged the 66-year-old had behaved aggressively and inappropriately toward them, and only days after veteran Democratic Representative John Conyers retired in the midst of an explosion of sexual misconduct allegations. It was also revealed today that Texas Republican Representative Blake Farenthold is also under House Ethics Committee investigation to see if he harassed, discriminated against or retaliated against female members of his staff or made inappropriate comments to them.

The bombshell about Franks also comes amid rumors that major US media outlets are working on a major exposé about lawmakers who have been accused of sexual harassment and used taxpayer funds to settle disputes.