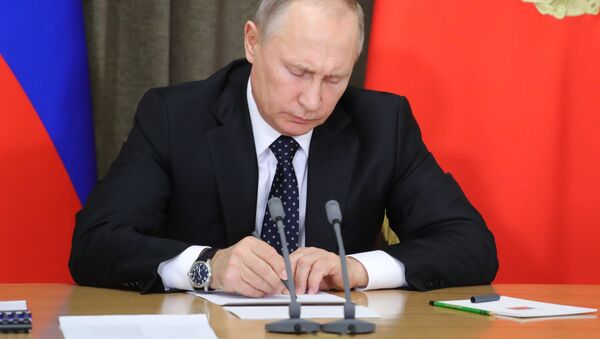 The Russian Justice Ministry is expected to start registering media outlets as foreign agents this week. The list will reportedly include nine US outlets.

MOSCOW (Sputnik) — Russian President Vladimir Putin has ordered the Justice Ministry to keep a register of foreign agent media, following his November 25 decree allowing some foreign media outlets to be listed as such.

In particular, the ministry will classify outlets receiving financial assistance from foreign states or organizations as "foreign agents" under the amendments earlier signed by the president, requiring them to publish a notice that their materials are provided by a foreign agent, report on their activities, submit information about the composition of their management and provide expense reports.

What Media Will Be Included

A source in Russia's upper house of parliament, the Federation Council has revealed to Sputnik what outlets could be included in the list by the Russia's Justice Ministry this week.

READ MORE: Decision on Banning Entry in Russian Parl't for US Media Takes Effect Next Week

The move follows previous notifications, made by the Russian Justice Ministry in regard to the Voice of America, the Current Time broadcaster and Radio Free Europe/Radio Liberty and some others.

The measure is a response to the pressure on Russian media in the US as RT America was forced to register as a foreign agent in the United States at the end of November to comply with the Justice Department's demand, which was earlier described as an "attack on freedom of speech" by Putin.

Accreditation of US Media

"We shall discuss the issue of Russia’s mirror-like response to discrimination of Russian media in the United States, including the possibility of a ban for accreditation of US media which will be declared foreign agents by the Russian Justice Ministry, in the Federation Council and the State Duma, at the commission’s session on December 13," Russian senior lawmaker Alexey Pushkov told Sputnik said.

Representatives of the Russian human rights council and the Civic Chamber, as well as experts, are expected to participate in the event.