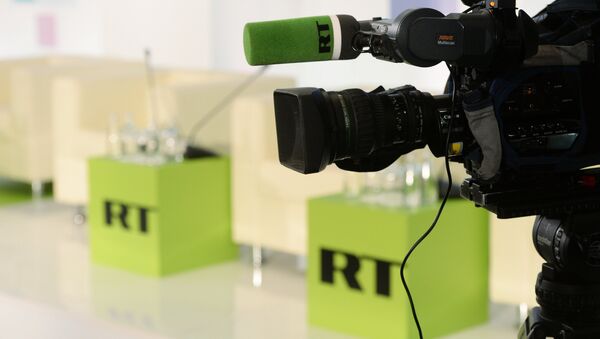 © Sputnik / Mikhail Voskresenskiy
/
Go to the photo bank
Subscribe
Philippe Leruth, President of the International Federation of Journalists representing about 500,000 journalists from more than 100 countries, on Thursday compared stripping Russian RT broadcaster of US Congress accreditation to a manifestation of "insidious censorship."

BRUSSELS (Sputnik) — On Wednesday, the US Congressional Press Galleries took away credentials from the RT broadcaster after it registered under the Foreign Agents Registration Act earlier in November.

"The withdrawal of the news credential of the RT Network by the Executive Committee of the Congressional Radio and Television Correspondents' Galleries appears to me as an insidious censorship," President of the International Federation of Journalists Philippe Leruth Leruth told Sputnik.

"I deeply regret and denounce it. As a democrat, you have to accept critics from dissenting media, while expecting from them the respect of the ethical journalistic rules," Leruth emphasized.

Withdrawal of News Credentials From RT Violates Press Freedom - Russian Envoy
Meanwhile, RT Editor-in-Chief Margarita Simonyan told the Rossiya 1 broadcaster that the "small" difference between Russia and the United States lies in Moscow’s unwillingness to teach the whole world democratic values as Washington does. A lot of members of the US establishment profit from the confrontation with China and Russia, the RT editor-in-chief noted.

"The difference between us [Russia] and them [the United States] is very small, it lies in the fact that we do not teach the whole world freedom, democracy, which do not exist in the United States, but they teach the world of that and unleash wars because of that," Simonyan said.

A number of Russian media outlets, such as RT and Sputnik have faced significant pressure in the United States over the past few months. On November 13, RT America had to register as a foreign agent in the United States under FARA upon the request of the US Justice Department. At the same time, Washington did not ask other state-funded foreign media outlets, such as China’s CCTV broadcaster, German Deutsche Welle and French France 24, to register as foreign agents as well.