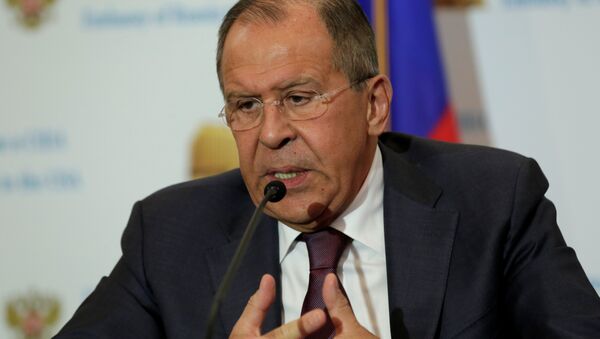 The US is trying to force Pyongyang to abandon its nuclear missile program. However, its actions have only lead to the escalation of the situation in the region.

"We have repeatedly stressed that the sanctions pressure is essentially exhausted, and that all those resolutions that had imposed sanctions necessarily included demands to resume the political process, resume negotiations, and this is completely ignored by the US side. I think this is a big mistake," Lavrov told reporters.

The minister stressed that the latest actions of the US authorities were aimed at provoking North Korea.

"The recent actions of the United States seem to be aimed deliberately to provoke Pyongyang to commit new harsh actions. It seems that everything has been done specifically to ensure that [North Korean Leader] Kim Jong Un snapped and took another adventurous move," Lavrov said.

He added that Washington should say directly whether it was seeking to find a pretext for destroying North Korea.

"The United States should first of all explain to us what they are trying to achieve. If they want to find a pretext for destroying North Korea, as the US Ambassador to the UN Security Council stated, they should say it directly, and the US leadership should confirm this. Then we will decide how to respond," Lavrov said.

On Tuesday, Pyongyang conducted its most advanced- ever ballistic missile test. The missile flew 950 kilometers (590 miles) and reached an altitude of 4,475 kilometers. The flight lasted for 53 minutes, after which the missile fell into the Sea of Japan, within the Japanese exclusive economic zone.

Earlier in the day, US Ambassador to the United Nations Nikki Haley urged countries around the world to cut off their commercial, diplomatic, military and any other ties with North Korea. US President Donald Trump said in a statement on Wednesday that new major sanctions would be imposed on North Korea in response to its latest missile launch.