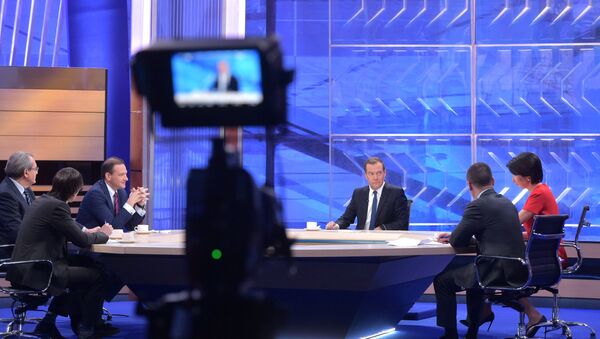 MOSCOW (Sputnik) — For more than five years, Dmitry Medvedev has held the role of Prime Minister, making him the head of the Russian government. On Thursday, he spoke to journalists about critical issues affecting Russia, both at home and abroad.

The Russian economy has resumed growth following its recession, Russian Prime Minister Dmitry Medvedev said in an annual interview with Russian television channels on Thursday. With regards to the Russian financial system, Medvedev thinks it is in a stable condition.

"The changes that have occurred in the economy are quite favorable," Medvedev said, adding that recently Russian President Vladimir Putin had announced that overcoming the economic recession was a key achievement.

However, the main thing hindering economic growth in Russia is poverty, according to Medvedev.

"We should take consolidated steps aimed at fighting it," Medvedev said.

In 2017, Russian economic growth totaled 2%, Medvedev stated, comparable to that of developed countries. However, he admitted that the Russian economy continues to depend on the oil and gas market.

The Russian economy suffered a setback in 2014, as the ruble lost about half of its value against the US dollar amid low global oil prices and Western economic sanctions imposed upon Russia over the situation in eastern Ukraine. On August 2, 2017 controversial sanctions were launched by the US president, as part of the "Countering America’s Adversaries Through Sanctions Act," which details the most far-reaching anti-Russia sanctions seen since 2014. However, they didn't manage to hinder the Russian economy, Dmitry Medvedev said earlier.

Dmitry Medvedev believes that the Russian-US relationship still has a chance to be improved, noting that he along with Russian President Vladimir Putin and the Russian Ministry for Foreign Affairs have repeatedly stated that. Bilateral relations should be improved on those points, that are on the agenda.

The Russian PM also told reporters that Donald Trump is a “friendly, adequate person, eager to find a compromise”.

Since 2014, relations between Russia and the United States have deteriorated amid the crisis in Ukraine, several rounds of anti-Russia sanctions, of alleged Russian media operations abroad interferring in the 2016 US presidential vote which subsequently lead to RT America's registration as a foreign agent in the United States. In turn, on November, 25 Russian President Vladimir Putin signed a law stipulating that media outlets that are financed from foreign states or organizations can be recognized as foreign agents.

Russia has a special responsibility for its cybersecurity due to its status of a nuclear power, Russian Prime Minister Dmitry Medvedev also stressed.

"We are protected now, taking into account various decisions — open, closed, monetary, and legal — in principle, not worse than other major countries. Mostly because we have a huge responsibility, as a leading nuclear country, as the largest country in the world, as a permanent member of the Security Council," Medvedev said.

Russian media outlets — RT and the Sputnik news agency – have faced significant pressure in the United States over the past few months, with US lawmakers and intelligence community claiming that the broadcaster may have been involved in Russia’s alleged attempts to influence the US 2016 presidential election. However, RT and Sputnik, as well as Russian authorities have repeatedly refuted the allegations as unsubstantiated. 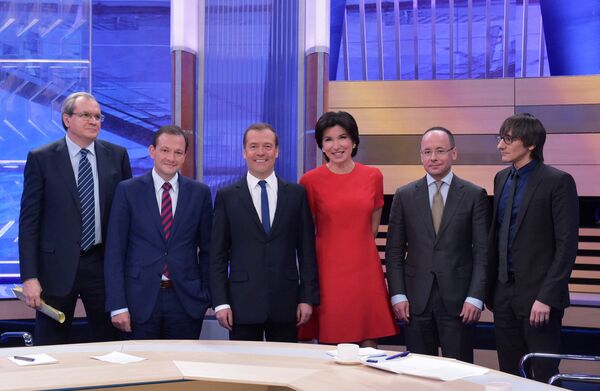