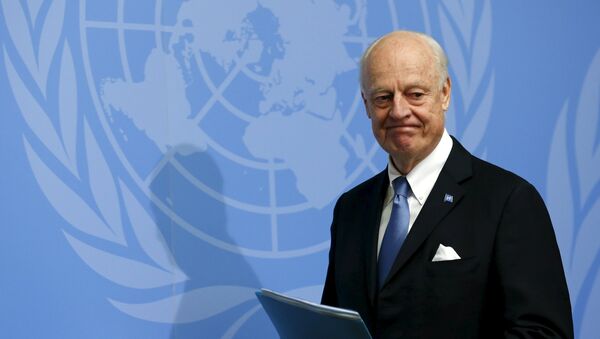 © REUTERS / Denis Balibouse
Subscribe
The UN Special Envoy for Syria told reporters about the current situation at the eighth round of intra-Syrian talks in Geneva.

GENEVA (Sputnik) — The eighth round of intra-Syrian talks in Geneva turned into a format of shuttle negotiations with the government and opposition delegations, UN Special Envoy for Syria Staffan de Mistura said on Thursday.

"We have started very close proximity parallel meetings. In fact, I have been shuttling between two rooms at a distance of five meters from each other," de Mistura said.

De Mistura noted that eighth round is expected to last until December 15.

"This round of Geneva talks is the eighth. We are planning to have it lasting upon December 15," de Mistura told reporters.

"What we have been thinking of is actually allowing any delegation during this weekend, and I think the government will do so, to actually return home, consult, refresh and come back next week, around Tuesday, in order to retake again the same round of discussion, so that we go through the 12 points and constitutional process and elections' aspect, and do so until the 15th of December," de Mistura said.

Opposition Negotiator Explains Why Direct Talks Unlikely at Geneva-8 Talks
De Mistura also said that the commonalities between the Syrian government and opposition delegations at the intra-Syrian talks in Geneva might form a basis for the future Syrian constitution.

"Today we shared with them [Syrian government and opposition delegations] commonalities that exist between them on what could be a shared vision of the future of Syria… They are important, because they might guide the shaping of future constitution," de Mistura said.

Also, de Mistura praised the efforts of Russia and Saudi Arabia in ensuring the presence of the government and opposition delegations at the eighth round of Geneva talks on Syrian settlement.

On November 22-24, Riyadh hosted a meeting of the Syrian opposition groups, bringing together nearly 150 representatives of Syria's opposition groups and movements. The participants of the meeting selected representatives for a long-awaited single delegation for Geneva-8 round from the Syrian Coalition, National Coordination Committee, Moscow and Cairo platforms, armed groups and independents. Absence of a unified opposition delegation had always been cited by Damascus as the reason why the talks could not become direct and move forward.

Almost simultaneously with the Riyadh conference of the opposition, Russian President Vladimir Putin met with Syrian President Bashar Assad in the Russian city of Sochi and discussed a number of issues related to the Syrian peace settlement.