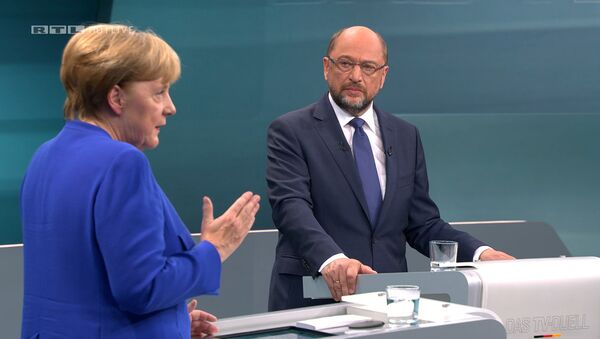 © REUTERS / Mediengruppe RTL Deutschland
Subscribe
Following the failure of Angela Merkel's Christian Democratic Union and its Bavarian affiliate, the Christian Social Union, to form a so-called “Jamaica coalition” with Germany’s Green party and Free Democrats, the Social Democratic Party (SPD) still can’t arrive at a decision on the Chancellor's invitation to return to a “Grand Coalition.”

On Monday, the party's panel held a session at the SPD headquarters in the Willy-Brandt-Haus building in Berlin. SPD Vice Chair Ralf Stegner told Sputnik in an interview that while he didn't support the idea of a potential coalition with Angela Merkel's CDU/CSU bloc, he also wouldn't want new elections to take place.

"We neither want to join the ‘grand coalition' nor to participate in the new elections… That just won't do," Stegner told Sputnik on Monday, adding that what Christian Social Union (CSU) party's leader Chef Horst Seehofer is saying is "Absurdistan."

Seehofer earlier claimed the SPD is not in a position to voice inflated demands during the talks because of the party's performance in the country's September elections.

"To reach an absolute deadlock [with regard to Jamaica coalition] and then lay down demands — that's what is completely absurd. We don't do that. We will be deliberating now on what Germany's federal president has called for, and after that our party members will decide what will happen."

Observers agree that in order to save face and preserve the party's credibility, the SPD has to pursue a new, more equitable social policy in a new version of the "black and red" coalition. Otherwise the party's results in future elections could be even worse.

"If I could make a wish, I would execute every paragraph of our party program. But even though we are in the middle of an Advent season, there's no such option as ‘make a wish.' We will contemplate through a prism of common sense, and our party members will eventually decide what to do next," Stegner noted.

Stegner citing Willy Brandt ("Country first, party next in line") Monday morning as he was talking to reporters, may signal that he believes a new big coalition is necessary. Obviously that is what the CDU wants as well, the alternative being even worse — new elections or a minority government. However, the CDU/CSU bloc is wary of welcoming the SPD with open arms.

German Chancellor Confirms CDU,CSU Agreement on Refugee Influx to Country
A couple weeks ago, one would hardly have assumed these kind of negotiations would be taking place. Back on election day, after his party had the worst result in an election campaign in the post-war era, SPD chief Martin Schultz categorically rejected the option of continuing a grand coalition. In subsequent weeks the party's panel unanimously reaffirmed its stance on the matter.

That makes it even more problematic for the party to persuade voters and party members that changes in that firm stance are necessary without scaring them away in the process.

Twenty-five years ago, Brandt cited a nation-first policy in an interview with Der Spiegel magazine. We probably will not find out whether Stegner was hinting at something concrete by citing the passage today before the country celebrates its Christmas holiday.

000000
Popular comments
Whatever they will do they will loose. The meltdown of the traditional parties is not only in Germany, this is seen in most Western European countries. In Italy, in France, in Greece, the fruits if their reckless immigration politics against their own people becomes visible, crimes are up and costs of living are severely on the rise. Even Macron on France will not last when people see that he is the same as his predecessors. The next economic turndown (recession) will be bloody.
cmat.wolfgang
28 November 2017, 12:03 GMT
000000
cmat.wolfgang, 100% in agreement with you. Will the real downfall accelerate once granny is removed from the reckoning???