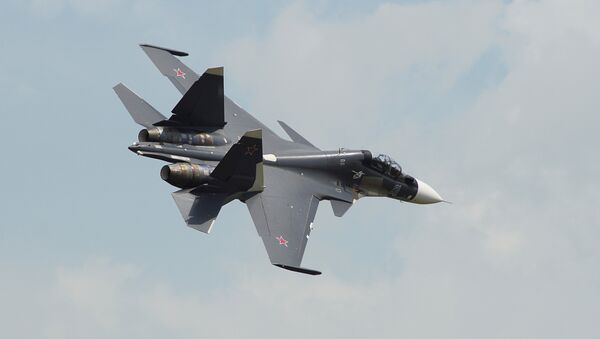 The US P-8A Poseidon reconnaissance plane was approaching the Russian state border in the Black Sea, according to Moscow.

"In order to intercept the target, a Su-30 fighter was scrambled from… the Southern Military District. The Russian fighter flew over the aerial object and visually identified it as American reconnaissance aircraft P-8A Poseidon," the Russian statement read.

In the wake of the incident, CNN reported, citing Pentagon spokeswoman Lt. Col. Michelle Baldanza, that Russia's Su-30 had made an "unsafe" intercept of a US P-8A Poseidon maritime, patrol and reconnaissance aircraft.

A Russian Su-30 fighter jet made an "unsafe" intercept of a US P-8A Poseidon aircraft Saturday while it was flying over the Black Sea https://t.co/Qyxntb6iny pic.twitter.com/ja4cKKWbcL

NATO F-16 Fighters Intercept Russian Jets in Int'l Airspace Over Baltic Sea
The Russian military reported that, after being detected by the Russian fighter, the US reconnaissance aircraft changed its trajectory to move away from Russia's airspace.

Such encounters occur on a regular basis, however, it is the first intercept reported as unsafe since June when a Russian jet came close to a US aircraft over the Baltic Sea.