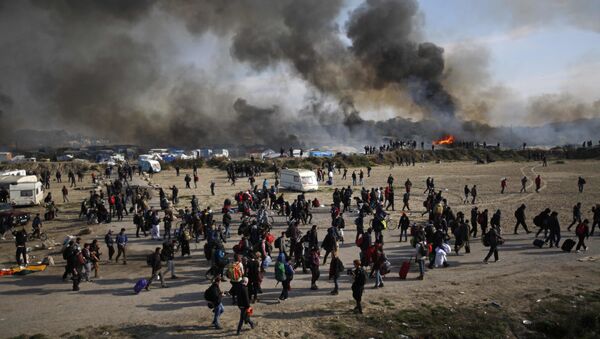 According to UK media reports, Britain will pay up to 90 million euros to France to renew security contracts to reinforce its border control at Eurotunnel terminals in Calais, Coquilles and Dunkirk after a surge in illegal crossings into the country.

PARIS (Sputnik) — France renegotiating the Le Touquet agreement with the United Kingdom, which regulates the flow of third-country migrants from France, will not help solve the migrant camp crisis in Calais, Jean-Claude Lenoir, the president of the French charity Salam, told Sputnik.

"For us reviewing the Touquet agreement is not a priority. In one way or another, migrants will still attempt penetrating the UK. What we need is for the European states, and the border states in particular, to sit together and come up with more intelligent solutions, so that it becomes less bad for migrants," Lenoir said.

According to Lenoir, the problem did not emerge due to ineffective laws or security but rather due to reception conditions which need changing.

"In France we believe that the UK did not play the necessary role in the reception of minors, especially since many of them already have families there. The family reunification is slow and inefficient. We are not treating the problem in its general context," he stated.

The least Paris and London could do, he added, was to treat the asylum applications of minors "in a normal atmosphere, in decent conditions."

"Of course it’s a problem of the lack of political will to do so. It’s true not only about Great Britain, but about France as well," Lenoir said.

The comment comes in the wake of UK media report, saying that the United Kingdom will pay up to 90 million euros ($106 million) to France to renew security contracts to reinforce its border control at Eurotunnel terminals in Calais, Coquilles and Dunkirk after a surge in illegal crossings into the country.

UK Unaware of Whereabouts of at Least 100 Child Refugees Smuggled From Calais
In July, French Interior Minister Gerard Collomb announced a willingness to renegotiate certain provisions of the Le Touquet agreement, adding that the UK policy on migrants is not enough to resolve the issues France is facing in Calais, which serves as a starting point for those looking to settle down in the United Kingdom.

Most recently, UK former Liberal Democrat leader Tim Farron said he wanted to propose a motion in Parliament to reintroduce the Dubs scheme for the relocation of unaccompanied minors to the United Kingdom, which first came into force in May 2016 and was suspended in February 2017 after admitting only 350 children. The Dubs scheme was initially designed to help migrant children from the camp in Calais known as "the Jungle."

Despite the fact that the camp was dismantled in 2016, many of its inhabitants stayed near the city instead of being relocated to other facilities across France. A court in the United Kingdom ruled against campaigners trying to force the UK government to take in as many child refugees as it would have under the Dubs Amendment.

A year on, what happened to the children of the Calais jungle? As @padspage argues, the intention to relocate 480 children ‘makes a mockery of the 3,000 originally voted through the House of Lords’. #MigrantMinors #ChildRights https://t.co/LNlA3rnVeJ